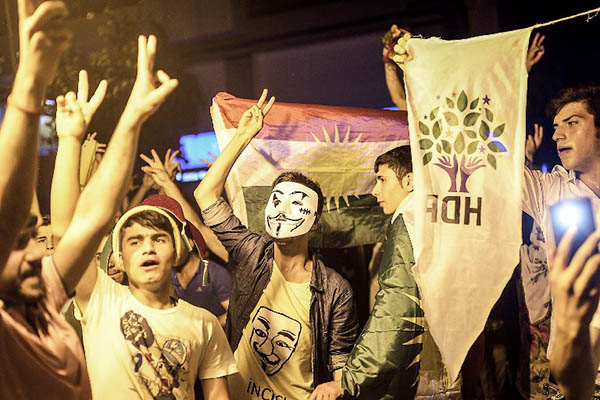 Turkey’s Islamic-rooted ruling party on Monday weighed its future strategy after losing its absolute parliament majority for the first time since winning power 13 years ago, in a stunning election setback for President Recep Tayyip Erdogan.

The Justice and Development Party (AKP) won the biggest portion of the vote in Sunday’s legislative polls but came well short of a majority in seats due to a breakthrough showing by the pro-Kurdish People’s Democratic Party (HDP).

Erdogan—who has dominated Turkey as premier from 2003-2014 and as now president—had been urging the AKP to win a crushing majority to create a presidential system with him at the top. Following AKP’s stunning defeat, the country faced weeks of political uncertainty and early elections were a real possibility, Turkish opposition and anti-government newspapers agreed Monday.

“Three possibilities,” said the Hurriyet daily in its headline, saying there could be a coalition, a minority AKP government or early elections. “A new era,” said the headline in the Milliyet daily. “The collapse,” added the strongly anti-Erdogan Sozcu. “Voters showed Tayyip the red card.”

The pro-government Yeni Safak said early elections were the most likely option. “The possibilities of a coalition are weak and an early election is on the horizon,” it said.

Official results based on 99.99 percent of votes counted put the AKP on 41 percent, followed by the Republican People’s Party (CHP) on 25 percent, the Nationalist Movement Party (MHP) on 16.5 percent and the HDP in fourth place with 13 percent. Turnout stood at 86.5 percent.

The result marked a major drop in support for the AKP, which in the last polls in 2011 won almost 50 percent of the vote, against the background of a weakening economy. According to official projections, the AKP will have 258 seats in the 550-seat parliament, the CHP 132, and the MHP and HDP 80 apiece.

The results wrecked Erdogan’s dream of agreeing a new constitution to switch Turkey from a parliamentary to a presidential system that he had made a fundamental issue in the campaign. Such a change would have required a two-thirds majority in the parliament and just months before the election Erdogan had been targeting 400 seats for the AKP.

Erdogan has yet to react to the vote and his official schedule on Monday showed no planned public appearance. Analysts have seen the nationalist MHP as the most likely coalition partner for the AKP in the new parliament.

However, while not firmly closing the door on the option, the MHP’s leader Devlet Bahceli was hardly effusive, saying the results represented the “beginning of the end for the AKP.”

“We have entered a difficult period in terms of the political balance,” said Yeni Safak’s influential pro-government commentator Abdulkadir Selvi, warning against a “drift into chaos” such as in the 80s and 90s.

Speaking from the balcony of AKP headquarters in Ankara, party leader and Prime Minister Ahmet Davutoglu put a brave face on the results. “The winner of the election is again the AKP, there’s no doubt,” he said.

The result was, however, a triumph for the HDP, which in the campaign had sought to present itself as a genuinely Turkish party and reach out to voters beyond its mainly Kurdish support base to secular Turks, women and gays.

It was also a personal victory for the party’s charismatic leader Selahattin Demirtas, dubbed the “Kurdish Obama” by some for his silky rhetorical skills. “We, as the oppressed people of Turkey who want justice, peace and freedom, have achieved a tremendous victory today,” Demirtas said, vowing to form a “strong and honest opposition.”

HDP M.P.s had sat in the previous parliament but they were elected as independents and not from a party list. “There is just one loser in the election—Recep Tayyip Erdogan,” pro-opposition commentator Hasan Cemal wrote in an editorial for the T24 website. “And the winner is the HDP.”

In Turkey’s main Kurdish city of Diyarbakir, cars massed in the streets, with drivers honking and people hanging out of windows making ‘V’ signs as gunshots were fired into the air. “It is a carnival night,” said 47-year-old Huseyin Durmaz. “We no longer trust the AKP.”

The legislative election took place under the shadow of violence, after two people were killed and dozens more wounded in an attack on an HDP rally in Diyarbakir on Friday.