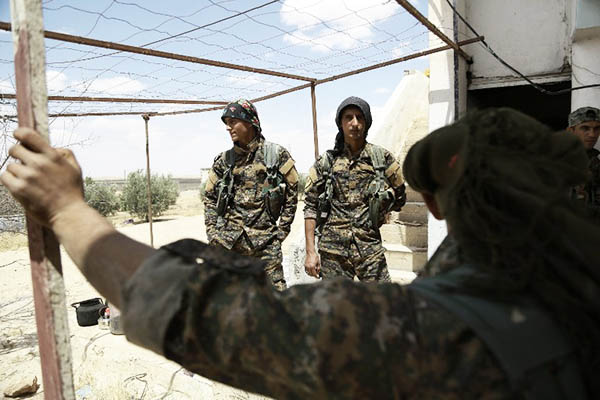 American commandos have been pictured aiding Kurdish militias in Syria.

Turkey on Friday accused the United States of hypocrisy after U.S. commandos in Syria were pictured supporting a major ground offensive led by a Kurdish militia branded a terror group by Ankara.

Foreign Minister Mevlut Cavusoglu said it was “unacceptable” that U.S. troops had been seen in images taken by an AFP photographer wearing insignia of the Kurdish People’s Protection Units.

Ankara regards the People’s Protection Units as a terror group, accusing it of carrying out attacks inside Turkey and being the Syrian branch of the Kurdistan Workers’ Party, which has fought an insurgency against the Turkish state for more than three decades.

However, Washington sees the Units as one of the most effective fighting forces against Islamic State jihadists inside Syria.

The issue has caused tensions between the two NATO allies for months.

“We advise them [U.S. troops] to wear badges of Daesh or Al-Nusra when they go to other parts of Syria and badges of Boko Haram when they go to Africa,” Cavusoglu said with angry sarcasm. “If they don’t see these [groups] as the same as the People’s Protection Units, then this is double standards, hypocrisy,” he said at a news conference at a meeting on Least Developed Countries in the southern resort of Antalya.

The AFP photographer saw U.S. forces on the ground in northern Syria helping the Kurdish-Arab Syrian Democratic Forces in a major offensive against I.S. in its stronghold of Raqa province. Several U.S. commandos were also photographed wearing the military insignia of the Units, which make up the bulk of the Democratic Forces.

“It is unacceptable for the soldiers of the United States—our ally which is very assertive in the fight against terror—to use or wear the badges of a terror organization,” Cavusoglu said.