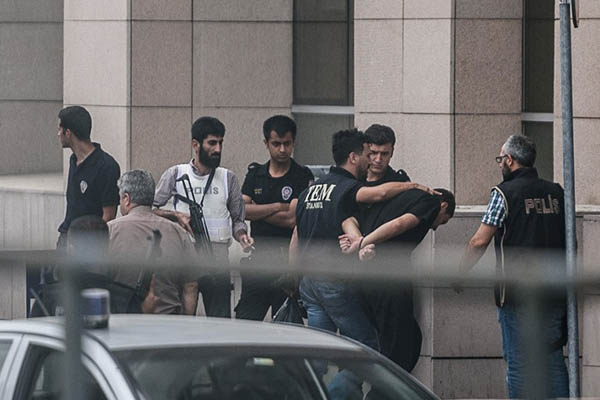 Turkey widened its massive post-coup purge to schools and the media on Tuesday, vowing to root out supporters of an exiled Islamic cleric it accuses of orchestrating the attempted power grab.

Global alarm is mounting over the retaliatory action since Friday’s failed putsch, which has already seen a massive crackdown in the military, police and judiciary and thousands detained including top generals.

Prime Minister Binali Yildirim said Turkey had sent dossiers to the United States to demand the extradition of reclusive preacher Fethullah Gulen, who has emerged as President Recep Tayyip Erdogan’s greatest foe. Tuesday’s action largely targeted supporters of Gulen, who lives in Pennsylvania but retains vast interests in Turkey ranging from media to finance to schools and wields influence in various apparatus including the judiciary and police.

The authorities also cancelled licenses for radio and television stations said to be linked to the so-called Gulenists. The state-run Anadolu news agency said 24 media outlets were hit, while 34 journalists were stripped of their press cards.

Already, almost 9,000 people including police, judges and government officials had been sacked in the days following Friday’s coup. About 9,300 people have also been detained, including top generals accused of treason for allegedly masterminding the plot as well as soldiers, police and judges.

Yildirim nevertheless warned Turks against exacting “revenge” on backers of the attempted overthrow, after disturbing pictures emerged of rough treatment meted out to suspects.

Erdogan spokesman Ibrahim Kalin defended the mass detentions and called on Washington to cooperate in handing over Gulen.

Ankara has long accused Gulen, once a close Erdogan ally sharing his Islamo-conservative views, of operating a parallel state in Turkey with the aim of toppling the government. Gulen dismissed the allegations he was involved in what he called “treason, a betrayal of the Turkish nation,” and said he was not concerned by the extradition move.

He suggested Erdogan himself might have staged the putsch, an idea dismissed by the presidency as “nonsensical.”

Turkey’s anxious Western allies have told Ankara to abide by the rule of law amid fears about a worsening state of democracy and human rights in the strategic NATO nation.

U.N. rights chief Zeid Ra’ad Al Hussein urged a fair trial for the suspects and voiced “serious alarm” over the purges. “This is the reaction of a wounded animal, a government which fears a repeat of the coup,” political scientist Ahmet Insel said. “But it is also a sign that it was already preparing purges of this kind and seized the opportunity.”

Erdogan’s suggestion that the death penalty could be reinstated has also sent shudders through Europe, with the E.U. warning such a move would be the nail in the coffin of Turkey’s already embattled bid to join the bloc.

The coup bid was the most serious threat to Erdogan since he took power first as prime minister in 2003, and saw rebel troops close down bridges in Istanbul, parliament bombed from the sky and protesters shot in the streets. The government says 312 people were killed, including 145 civilians, 60 police, three soldiers and 104 plotters.

The chaos has raised deep concerns about the stability of the country, home to a key base used in the U.S.-led fight against the Islamic State group and which houses a large nuclear weapons stockpile. The ensuing crackdowns have hit financial markets, with the currency plunging to around three lira to the dollar, after the central bank cut interest rates and Moody’s said it was reviewing Turkey for a possible downgrade.

An Ankara court on Monday remanded in custody 26 former generals over the putsch, including former air force chief General Akin Ozturk, who has been painted by some Turkish media as the mastermind but has denied the claims. State media published images of a haggard-looking Ozturk, one ear heavily bandaged, and other suspects at the courthouse, their hands tied behind their backs.

The military has often had strained relations with Erdogan’s Islamic-rooted government as the guardians of Turkey’s secular system and has carried out coups in the past. But it said the vast majority of its members had nothing to do with Friday’s plot and that the “traitors” would be punished severely.

Erdogan has remained in Istanbul since he flew back on Saturday from the holiday resort of Marmaris where he was staying when the coup struck. The president, who critics have long accused of becoming increasingly autocratic, has spoken to supporters every night, urging them to maintain a “vigil” for democracy. He told CNN his life had been in grave danger. “If I stayed [in Marmaris] 10, 15 minutes more, I would either have been killed or kidnapped and taken away by them.”