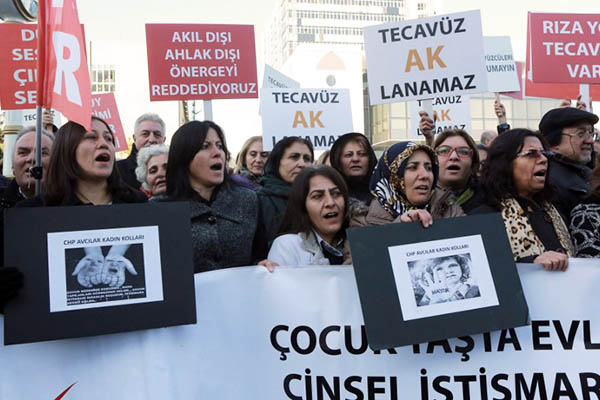 A Turkish parliamentary committee on Wednesday threw out a bill that could have pardoned men convicted of child-sex assault, sealing the end of a controversy that led to a huge public outcry and protests.

A majority in parliament’s justice commission voted to remove the proposed legislation from its agenda, the official Anadolu news agency said. Critics had said the bill, which provided for the release from jail of men convicted of sexually assaulting underage girls if they marry their victims, would legitimize the rape of minors.

Thousands across Turkey had joined protests against the bill, with the usually divided opposition coming together in support of its withdrawal after it was initially approved last week. The government had removed the legislation from parliament on Tuesday but indicated it could still be reviewed by the commission and sent back to the full assembly.

Wednesday’s development means that entirely new legislation would have to be drawn up for the bill to return, with the government apparently keen to see the end of the uproar.

Its shelving marks a rare concession to popular opposition by the ruling Justice and Development Party (AKP) co-founded by President Recep Tayyip Erdogan since it came to power in 2002. Justice Minister Bekir Bozdag and other government ministers had strenuously rejected critics’ claims that it would have legalized child rape. They insisted it was aimed at helping thousands of families where the father had been jailed for sexual assault after his under-age partner fell pregnant.

Bozdag told the commission on Wednesday that the proposed legislation would “not have even covered one rapist but it was misunderstood.”

“We did not explain ourselves well,” he admitted, quoted by the Hurriyet daily.

Prime Minister Binali Yildirim had previously said the provision would have affected 3,800 families.

Child marriage remains widespread in Turkey, especially in the southeast, with more than five percent of over 600,000 official marriages involving girls aged 16 and 17.