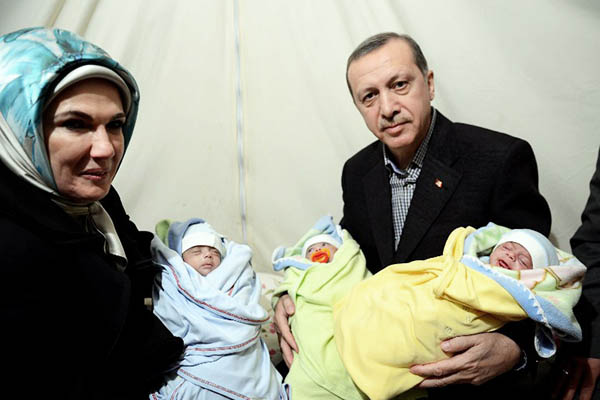 Erdogan has made no secret of his desire for Turkish women to have more children, saying in December that “one [child] means loneliness, two means rivalry, three means balance and four means abundance.”

In addition to four months of paid maternity leave, the new measures allow mothers to work part-time—also paid by the government—until their child turns five. After the birth of a child, couples will receive a one-off payment up to 600 Turkish liras ($260). Those with more than one child will be given extra funding.

Davutoglu said the measures were necessary because the country’s economic future will be “at risk” if it fails to properly address the problem of an ageing population. He said that Turkey, a country of 76 million, needs to maintain its fertility rate of 2.1, or at least two children per woman, for the population to “replace itself naturally.”

“The economy can be restored after a crisis but if the fabric of the family is damaged, we cannot restore it,” he said in televised comments.

Davutoglu, whose wife Sare still works as a gynecologist, added that mothers should not be forced to choose between motherhood and their professional career.

Turkey’s population was barely 20 million in 1950 but grew rapidly in subsequent decades. However population growth had flattened off to just over one percent in the last 10 years.

Erdogan recently claimed that women were not equal to men and described birth control as “treason,” sparking a furious reaction from some women who accused him of undermining Turkey’s secular status. And last week Health Minister Mehmet Muezzinoglu caused uproar by saying women should prioritize the “career” of motherhood before anything else.

These stupid people evidently intend to populate the earth. This planet urgently needs reduction of the human population or it is ruined.

This guy is potentially a new Hitler or an empire builder like Putin.