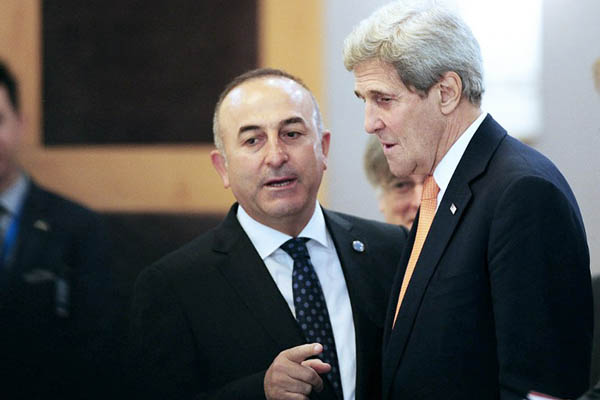 Foreign minister says NATO needs to tackle grassroots of terrorism in addition to airstrikes on militants.

Turkey on Tuesday called for determined action from NATO member states against the “significant” threat posed by Islamic State jihadists who have taken swathes of Iraq and Syria up to its borders.

Foreign Minister Mevlut Cavusoglu said in Antalya that the threat from I.S. to the south of the NATO alliance’s borders would be a key issue when its top diplomats hold a two-day meeting from Wednesday. He praised a plan—still yet to be realized—for moderate Syrian opposition to be trained and equipped on Turkish territory in cooperation with the United States but said more was needed.

“This will be effective but this will not be enough on its own and we have to take further steps,” he told a news conference ahead of the meeting, adding that measures like airstrikes were also not sufficient alone. “In order to eradicate terrorism we need to deal with the grassroots of terrorism,” he added, without elaborating further on the nature of the steps required.

Turkey has in the past called for the creation of a security zone inside Syria to protect its borders. But the idea has received just lukewarm support from its Western allies.

Turkey, the sole Muslim majority member of NATO, has been criticized for itself not taking harder steps against I.S. with some commentators even questioning its future in the alliance.

President Recep Tayyip Erdogan has always insisted the exit of President Bashar al-Assad is the key to peace in Syria. But Cavusoglu insisted that Ankara was deeply troubled by I.S,. noting that the militants controlled border posts on Syria on the Turkish frontier.

“Turkey is the only member of the alliance to have borders with Daesh,” he said, using an Arabic origin and pejorative term for the group. “Daesh on our borders is not a sustainable situation. It poses a significant threat to us. It is a neighbor to Turkey,” he added.

Cavusoglu pointed to foreign fighters from “90 different countries” who have tried to come to Turkey in transit on their way to join I.S. in Syria. “Once they enter our country, it becomes very difficult to control our borders. We have to rid the region of terrorism. For this we need determined policies.”

He batted off criticism that Turkey was not doing enough to halt the flow of foreign militants, saying that 1,300 had already been deported from the country during the Syria conflict.