Turkey’s Syria Offensive, By the Numbers 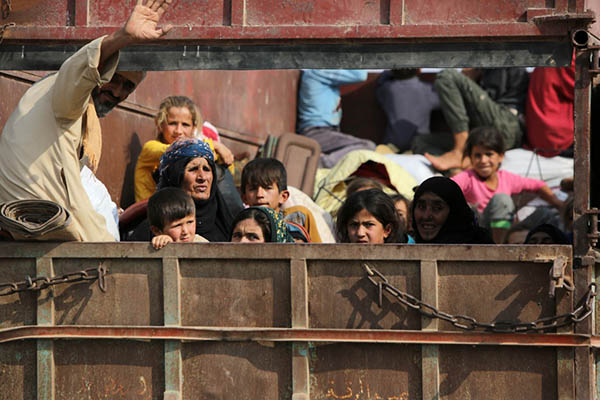 A Turkish offensive against Kurdish groups in northeastern Syria is having a dramatic effect on civilians, with dozens killed and hundreds of thousands fleeing their homes.

Below are some of the figures highlighting the impact.

Population of northeastern Syria, much of which has been under Kurdish semi-autonomous control in recent years.

Days since Turkey launched an offensive against Kurdish groups in northern Syria, after U.S. President Donald Trump indicated he would withdraw forces that had been working with the Kurds against the Islamic State group.

Number of Kurdish civilians killed in Syria since, according to the Syrian Observatory for Human Rights war monitor (SOHR). Twenty civilians have been killed on the Turkish side of the border.

Civilians displaced within Syria since the start of the assault on Oct. 9, according to the SOHR, which labeled it one of the largest upheavals since Syria’s civil war began in 2011.

Newly displaced people the United Nations has provided food for, with blankets distributed for 52,000 people.

Schools that have become emergency shelters for the displaced (SOHR).

Civilians in northeast Syria in need of aid even before the Turkish offensive (U.N.).

People in and around the predominantly Kurdish city of Hasakeh at critical risk of water shortage (U.N.).

People held in the cramped Kurdish-run Al-Hol camp, mostly relatives of current or former I.S. members, including European citizens (U.N.). The fate of the camp’s residents is a major international concern.

International NGOs that left the predominantly Kurdish region in northern Syria due to the deteriorating security situation, according to a local official.

Percentage of Syria’s cereal produced in northeastern Syria, with the winter planting season at risk due to the offensive (U.N.).

Syrian refugees in Turkey, many of whom Turkish President Recep Tayyip Erdogan says he wants to move back to the “safe zone” he intends to create in northern Syria.