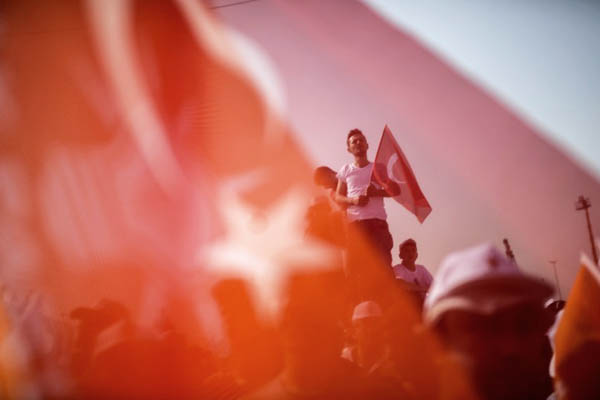 A Turkish daily on Friday published images it said showed the Turkish spy agency helping to smuggle jihadists into Syria, the latest allegations by the newspaper accusing the authorities of aiding extremist groups across the border.

But Friday’s story showed the staunchly secular Cumhuriyet is not giving any ground in an increasingly tense standoff with the Islamic-rooted government ahead of Sunday’s legislative elections.

Cumhuriyet said that a group of jihadists were first brought to the Turkish border town of Reyhanli on Jan. 9, 2014 from Atme refugee camp in Syria in a clandestine operation. From there, they were smuggled into Tal Abyad, a border town used by the Islamic State (I.S.) as a gateway from Turkey, on two buses rented by the MIT, Cumhuriyet claimed.

The daily showed images of the buses, which it said were stopped by police a day after the operation following a tip-off that they were smuggling drugs into Syria.

It was revealed that the buses had been used to smuggle jihadists after investigators found bullets, weapons and ammunition abandoned in the buses, the paper said. The drivers of the buses, who were briefly arrested, said in their testimony they were told that they were carrying Syrian refugees and the vehicles were rented by the MIT.

Last week Cumhuriyet published footage from Jan. 19, 2014 showing Turkish security forces discovering boxes of what it described as weapons and ammunition being sent to Syria on MIT trucks intercepted near the Syrian border. The story touched a nerve as it accused Erdogan of covering up arms shipments to Syrian rebels fighting President Bashar al-Assad, a claim the president vehemently denies.

In his complaint to prosecutors, Erdogan demanded Dundar serves two life sentences and 42 years in prison for espionage and publishing false information, sparking outrage at home and abroad.

Tensions are running high in Turkey in the run-up to Sunday’s parliamentary elections where Erdogan wants his ruling Justice and Development Party (AKP) to secure a commanding majority in parliament. This would allow the party to rewrite the constitution and create the powerful executive-style presidency Erdogan yearns for.