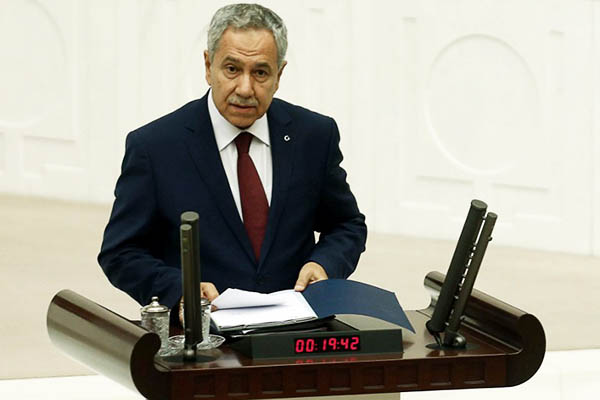 Bulent Arinc told a female deputy to ‘as a woman, be quiet!’ when she tried to interrupt his speech.

Turkey’s deputy prime minister on Wednesday ignited a new row over discrimination against women in Turkish politics when he told a female deputy who tried to interrupt his speech to “as a woman, be quiet!”

Deputy premier Bulent Arinc made the remark while speaking during an emergency debate in parliament over the government’s military intervention against jihadists in Syria and Kurdish militants in Iraq. Justifying the decision to attack Kurdish militants in Iraq, his comments were loudly mocked by members of the pro-Kurdish People’s Democratic Party (HDP), including female lawmaker Nursel Aydogan.

“Madam be quiet! You as a woman, be quiet!” shouted Arinc in the debate broadcast on live television, growing increasingly irritable as he struggled to make his words heard.

The incident spawned immediate outrage online, with Turkish women posting angry comments under the Twitter hashtag #BirKadinOlarakSusmayacagiz (as women we are not going to be silent), which began trending nationwide. “Woman are quiet in their politics but unquiet women will teach them democracy,” tweeted @Ozgurlugedogru. The hashtag #KadinDusmaniArinc (Arinc is an enemy of women) also gained popularity.

The HDP and also the main opposition Republican People’s Party (CHP) demanded an apology from Arinc.

“We as the CHP strongly condemn the sexist, discriminatory and humiliating comments violating women’s rights,” said CHP deputy leader Selin Sayek Boke. “Making such a comment under the roof of parliament is unacceptable. We invite him to apologize,” she added.

This is hardly the first time Arinc has been in hot water over comments deemed sexist. In July 2014, he sparked an outcry by declaring that women should not laugh loudly in public. This prompted viral videos and pictures of Turkish women laughing in defiance.

The HDP’s Nursel Aydogan, the target of Arinc’s outburst, said: “I don’t take it personally. It is an insult against all women including their own [ruling party] lawmakers.”