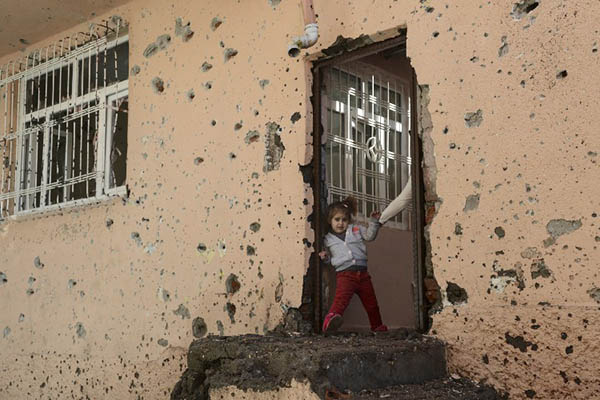 The operations conducted inside the towns of Cizre and Silopi in the southeastern province of Sirnak, backed by curfews, mark a new escalation in five months of fighting with the PKK since a two-and-a-half year truce collapsed. Twenty-four PKK members have been killed in Cizre since the operations began earlier this week, while one was killed in Silopi, security sources told AFP, increasing an earlier toll. The authorities had already announced on Wednesday that eight PKK fighters had been killed in Cizre.

According to Turkish media, some 10,000 members of the police and army have been deployed in Cizre and Silopi in one of the biggest operations yet against the PKK, who have erected barricades and dug trenches inside the towns. Cizre has a population of some 100,000, and Silopi more than 80,000. Images have shown de-facto urban warfare taking place, with the army clashing with militants in the otherwise deserted streets.

The army said in a statement that six members of the security forces had received non-life threatening wounds in Cizre while two had also been hurt in Silopi.

Although analysts have called for peace talks, the authorities led by President Recep Tayyip Erdogan have said Ankara must eradicate the PKK, which in recent months has again built up a significant presence in urban centers. “The terrorists wanted to paralyze daily life in these towns by intimidating inhabitants who they had extorted,” Interior Minister Efkan Ala told the state-run Anatolia news agency. He said the authorities had seized 2,240 weapons, 10 tons of explosives and 10,000 Molotov cocktails from the militants.

Images published by Anatolia showed heavily armed soldiers backed by tanks going house-to-house in the towns and firing from street corners. “You [the PKK] will disappear into those trenches that you dug,” Erdogan told supporters in a speech in the central city of Konya broadcast on television. “This struggle will not stop until a peaceful environment is established. There is no stopping,” he added.

The authorities also imposed blanket and open-ended curfews in the two towns, the latest in a succession of such measures across the southeast that have angered activists. There have also been growing tensions over a curfew in the Sur district of southeastern Diyarbakir province—also mainly Kurdish—that has been in place almost uninterrupted since Dec. 2. There were new clashes early Thursday between police and pro-PKK sympathizers in Diyarbakir, an AFP correspondent reported.

In a new report Thursday, the International Crisis Group (ICG) urged both sides to “urgently” resume peace talks, saying Turkey’s return to a military-based approach would only intensify the conflict. “Turkey faces a critical choice: to advance its military strategy against the PKK in a fight that is bound to be protracted and inconclusive, or to resume peace talks,” the non-governmental think tank said.

The ICG said that rather than talking to jailed PKK leader Abdullah Ocalan, Turkey’s “strategy is instead centered on fighting the PKK, particularly until its recently empowered urban structures are eradicated.” It expressed alarm that the urban battles have “given the conflict a new, unpredictable momentum.”

The conflict had also complicated the fight against the Islamic State group in Syria, with Turkey refusing to collaborate with the Kurdish fighters who have been battling the jihadists on the ground, the ICG said.

The PKK launched a formal insurgency against the Turkish state in 1984, initially fighting for Kurdish independence although it now presses more for greater autonomy and rights for the country’s largest ethnic minority. The conflict has left tens of thousands dead.