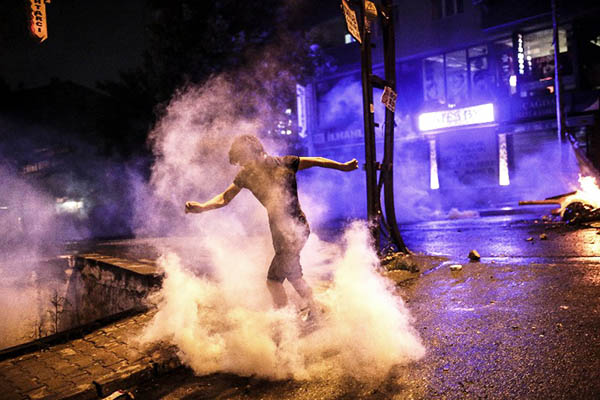 Turkish police on Friday used tear gas and rubber bullets to disperse a protest by hundreds of people in Istanbul to denounce violence by Islamic State group jihadists, an AFP photographer reported.

Some 500 people turned out for the protest in the Kadikoy district on the Asian side of Istanbul to condemn Monday’s suicide bombing in Suruc blamed on I.S. that killed 32 pro-Kurdish activists close to the Syrian border. The protesters also denounced the government, who they accuse of allowing I.S. jihadists inside Turkish territory.

As with similar protests over the last days, police used rubber bullets and tear gas to disperse the protest, sending people fleeing into neighboring streets to escape, the photographer said.

The protest came as Turkey bombed I.S. targets in Syria and arrested hundreds of militants in its most significant actions yet against the group. Thousands are expected to respond to a call from Turkey’s main pro-Kurdish party and turn out for a “march for peace” on Sunday in Istanbul, which is set to be monitored by a heavy security presence.