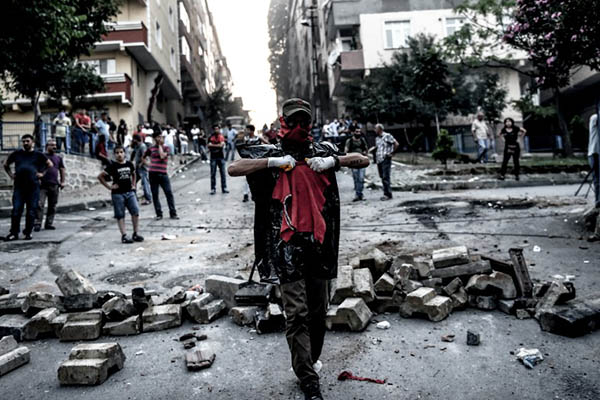 A Turkish policeman was killed on Sunday during clashes with protesters in the flashpoint Istanbul district of Gazi, which has witnessed riots for the last three days following the death of a leftist activist during raids by the security forces.

Policeman Muhammet Fatih Sivri was shot in the chest from inside a building while he tried to make an arrest during clashes, which have raged all day, the official Anatolia news agency said. He was rushed to hospital but died from his wounds, it added.

Turkish protesters had earlier engaged in pitched battles with the security forces in a third day of intense clashes in the area, an AFP photographer said. Protesters hurled stones and Molotov cocktails at the police who responded with water cannon, plastic bullets and tear gas. Some protesters then fortified their positions by erecting barricades in the middle of the street, the photographer said.

Protesters wrapped handkerchiefs around their noses and mouths to protect themselves from the tear gas, while others wore gas masks. Some took to roofs to throw Molotov cocktails onto the police from above. Some tried to use a giant umbrella advertising a well known ice cream brand to protect themselves from the water cannon. But the force of the spray destroyed the umbrella, knocking protesters over.

The district, which lies well north of the city center of Istanbul, has been tense since the killing of Gunay Ozarslan on Friday during nationwide police raids against suspected militants. The raids were part of a nationwide crackdown on suspected militants as Turkish armed forces pounded targets of the Islamic State (I.S.) group in Syria and Kurdish Kurdistan Workers Party (PKK) militants in northern Iraq.

The Gazi district is known as a stronghold of Turkey’s Alevi community, who adhere to an offshoot of Shia Islam. Strong supporters of secular principles, many are bitter opponents of the ruling Islamic-rooted Justice and Development Party (AKP).

The area has been the scene of intense clashes since Friday but Sunday’s rioting was some of the most serious seen so far as leftist groups from across the city joined in. The clashes were sparked when the police moved in after activists refused to hand over the body of Ozarslan to the municipal authorities for burial.

Instead, the corpse is being kept in a local cemevi, an Alevi place of worship, which the police tried to raid earlier.

The area was hit by several days of sustained rioting in 1995 that left some 20 people dead and was sparked by a gun attack on several cafes. As well as I.S. and the PKK, the mass arrest operation has targeted suspected members of the PKK’s youth wing, The Patriotic Revolutionary Youth Movement (YDG-H), and the Marxist Revolutionary People’s Liberation Party Front (DHKP-C).

Pro-government media have linked Ozarslan with the DHKP-C but the circumstances of her death remain unclear.

Anatolia said Sunday that a total of 851 people have been arrested since Friday in the raids, which have taken place in 34 different provinces across Turkey.