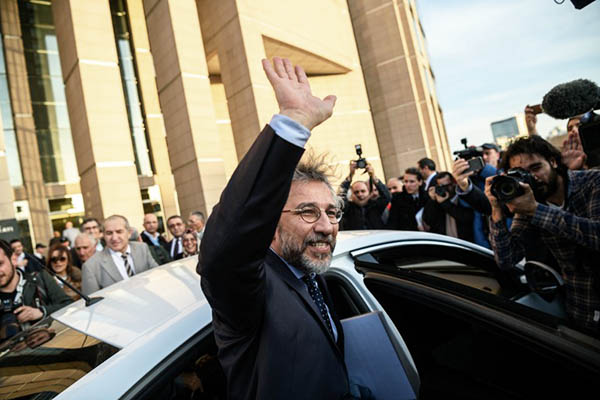 Can Dundar, editor-in-chief of Cumhuriyet, leaves court after the hearing. Ozan Kose—AFP

Two Turkish journalists accused of spying remained defiant on the second day of their trial Friday, in a case seen as a test of press freedom under the increasingly autocratic President Recep Tayyip Erdogan.

Can Dundar, editor-in-chief of leading opposition daily Cumhuriyet, and Erdem Gul, his Ankara bureau chief, are also charged with revealing state secrets over a story accusing the government of seeking to illicitly deliver arms to rebels in Syria. The journalists could face life in prison, but a defiant Dundar voiced optimism they would be found not guilty at the Istanbul criminal court.

“We will win. We have always won throughout history,” the bespectacled editor told reporters. “We think the laws will show we are right and we will be acquitted.”

The prosecution has sparked outrage among opposition and rights groups in Turkey as well as in the West, where it is seen as proof of Erdogan’s determination to silence his opponents. Almost 2,000 people have been prosecuted for “insulting” him since the former premier became president in August 2014, Turkey’s justice minister said in March.

Reporters Without Borders ranked Turkey 149th out of 180 countries for press freedom in 2015, citing the widening clampdown on critics of the president.

As on the first day of the trial, which opened March 25, Friday’s hearing in Istanbul was held behind closed doors for reasons of national security. “It’s journalism that is on trial here. This trial should not be taking place,” said Gul. “We are defending information and freedom of expression. Justice will take its course,” he added. “There is no reason for this trial—journalism is not a crime.”

A knot of supporters including opposition lawmakers and NGO staff gathered to shout their support, yelling: “You can’t gag press freedom.”

The pair were not remanded in custody when the court was adjourned, but they are forbidden from leaving the country before the trial resumes on April 22.

Cumhuriyet’s report on a shipment of arms being intercepted at the Syrian border in January 2014 sparked a furor when it was published in May, fuelling speculation about Turkey’s role in the Syrian conflict and its alleged ties to Islamist groups in the country.

Erdogan reacted furiously to the allegations, personally warning Dundar he would “pay a heavy price.” The court on March 25 accepted the president and Turkey’s intelligence agency as civil plaintiffs in the case.

Dundar and Gul won a first victory on Feb. 26, when the Constitutional Court—one of the last institutions not under the full control of Erdogan’s Justice and Development Party—ruled they should be freed. A vexed Erdogan declared he had “no respect” for the court’s decision.