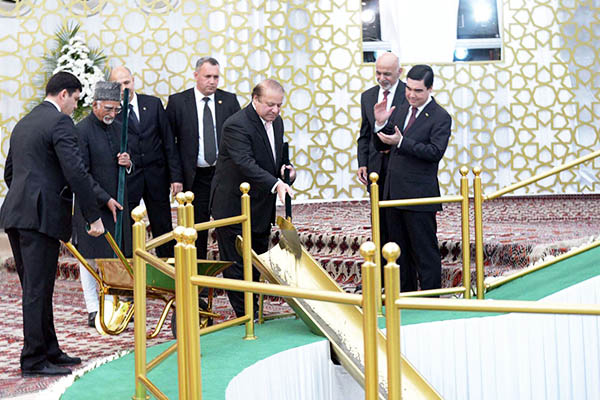 President Gurbanguly Berdymukhamedov of Turkmenistan and President Ashraf Ghani of Afghanistan attended the ceremony in the Karakum desert outside the Turkmen city of Mary, marking the beginning of work on the Turkmenistan-Afghanistan-Pakistan-India (TAPI) link. They were joined by Prime Minister Nawaz Sharif of Pakistan and Indian Vice-President Mohammad Hamid Ansari.

“Today we were participants and witnesses of a historic event. Today marks the start of a project of great scale—the TAPI pipeline,” said Berdymukhamedov during the ceremony, which took place in a pavilion imitating a traditional Turkmen nomadic dwelling.

Turkmenistan has said it expects the gas link with an annual capacity of 33 billion cubic meters to be completed by the end of 2018. Afghanistan, India and Pakistan have all repeatedly stated their commitment to the natural gas project despite the bilateral tensions Delhi and Kabul have with Islamabad.

On Sunday, the leaders praised the pipeline as a political project that will help bring about better relations in the volatile region. “The TAPI gas pipeline project will help promote peace and trade amongst the regional countries,” said Sharif.

The Indian vice president said TAPI was “more than a project” and described it as “the first step to the unification of the region,” in translated remarks.

Afghanistan’s Ghani, for his part, said the project demonstrated the countries’ political will. “We are committed to the stable development of the entire region which will develop in an active and stable manner if we cooperate,” he said in translated remarks.

Energy experts say the project does indeed have potential to ease relationships in the divided region. “TAPI is a challenging project, partly because of these bilateral tensions,” said Charles Hendry, Britain’s former energy and climate change minister. “But I think it is precisely this kind of big multi-state project that can bind countries together geopolitically,” Hendry, chairman of London-based Eurasia Partners consultancy, told AFP at an energy conference in Turkmenistan’s capital Ashgabat last month.

Berdymukhamedov also said Sunday marked the beginning of the third phase of development of the Galkynysh gas field, which will provide the resource base for the TAPI pipeline. The next phase of development at Galkynysh—the second-largest natural gas field in the world—will be overseen by a consortium of Japanese and Turkish companies in addition to Turkmenistan, Berdymukhamedov said.

Uncertainty hangs over the costly TAPI project, however, with both security and the lack of a major commercial investor stymieing optimism. “Initially the questions were about whether Turkmenistan had enough gas and whether the demand was there in India and Pakistan,” Luca Anceschi, a Central Asia expert at the University of Glasgow, told AFP by telephone on Sunday. “With the assessment of the Galkynysh field and the situation in both those countries, those questions have now been answered positively. But the question of security is one that really hangs over the project and increases its costs.”

Several major Western energy firms have appeared to back away from the project, with only Dubai-based Dragon Oil, which works in Turkmenistan’s petroleum sector, confirming interest. Nevertheless, a spokeswoman for the company’s Turkmenistan office said in emailed comments last month that “nothing had formally been decided” regarding its participation in the project.

The isolated Central Asian state has shown increasing will to get the project off the ground amid a worrying dependence on China, which imports around three-quarters of its national gas output via the Central Asia-China pipeline, completed at the end of 2009. Turkmenistan once suffered from a similar dependence on former master Russia, which was the country’s main customer before China came to the fore.

But Moscow’s energy giant Gazprom announced its intention to wind down purchases of Turkmen gas and was blasted in a Turkmen government publication as an “unreliable partner” this year amid ongoing contractual disputes.