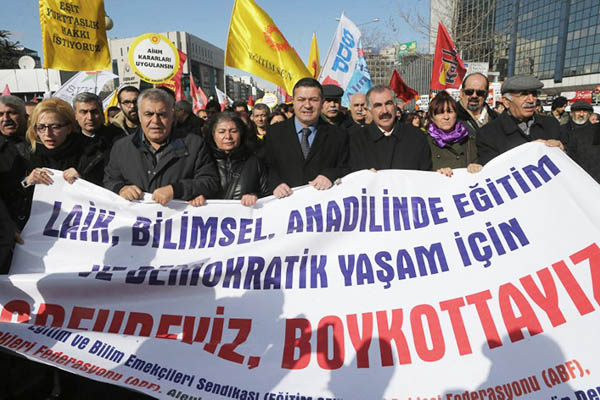 Secular Turks opposed to President Recep Tayyip Erdogan on Friday boycotted schools and took to the streets to demand a secular education and denounce a claimed creeping Islamization of the schools system.

The protests were led by the Alevis, an offshoot of Shia Islam that also comprise Turkey’s largest religious minority, as well as leading education union Egitim Sen. It was not immediately clear how many pupils had failed to attend schools due to the boycott but Turkish media reports said it was followed in cities including Istanbul, Ankara, Izmir, Edirne, and Antalya.

Television pictures showed that police had used water cannon to roughly disperse a protest in the Aegean city of Izmir. Fifty-six people were arrested, according to NTV television.

Police used tear gas to disperse scores of protestors demonstrating in Ankara, an AFP photographer reported. There were also protests in Istanbul. “I am not sending my child to school today to denounce the rampant Islamism in public education,” said Ahmet, an Alevi Ankara resident working in the civil service, asking not to give his surname.

Secular Turks and Alevis in particular have been angered by the compulsory religion lessons used in schools under a system that has been amended by the ruling Islamic-rooted Justice and Development Party (AKP). Alevis are upset that the compulsory classes prioritize Sunni Islam, the dominant religion of Turkey, which is practiced by almost all the current ruling elite.

“Children can learn religion at home. It is unjust to impose it on them at school,” said Ahmet.

Alevis have traditionally been champions of secularity in Turkey, believing it to be the best way to protect their own rights in the majority Sunni Muslim country. Thousands of Alevis had rallied last weekend in Istanbul in a mass rally demanding more rights for their community.

Alevis are by far Turkey’s largest religious minority, estimated to form between 10-20 percent of the population, but are not recognized by the state as an official group. Only Jewish or Christian children in Turkey—the two minorities recognized in the country—can be excused from the religious education classes.

Many activists have been angered by the interventions of the AKP in the Turkish education system, which they allege have undermined the country’s secular system founded by Mustafa Kemal Ataturk. The government lifted a ban on female students wearing the Islamic headscarf in high schools and has encouraged the opening of Imam Hatip schools which mix religious education with a modern curriculum.

Thanks for this nice article. Keep it up. 🙂