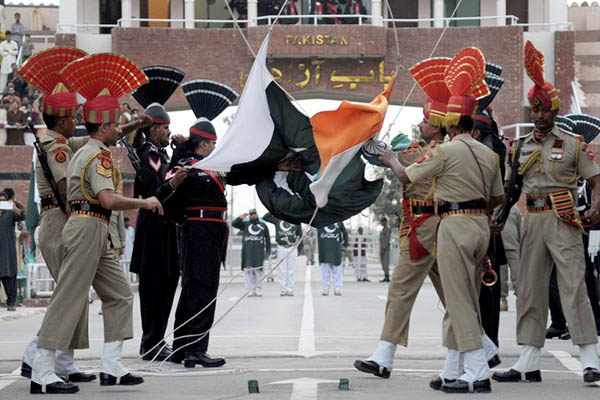 It’s time Pakistan moved past a foreign policy based around hatred of India.

The latest outpouring of outrage in Pakistan was prompted by a speech Prime Minister Nawaz Sharif gave to Karachi’s Hindu community, equating them as equal citizens to Muslims in the country. The statement attracted the right’s ire, with Pakistan’s clergy condemning his words. Ahle Sunnah wa Jama’ah head Muhammad Ashraf Jalali was particularly abusive, terming the speech against the edicts of the holy Quran. “Jalali,” his nom de guerre, means “enraged.”

P.M. Sharif’s conduct contrasts with that of his Indian counterpart who has planted a Hindu yogi chief minister known for persecuting Muslims to the chief minister’s post of Uttar Pradesh state. Just as the BJP is showing dissatisfaction with New Delhi’s secular constitution, Sharif has taken to quoting founder Mohammad Ali Jinnah’s Aug. 11 speech about a secular Pakistan, suggesting a renewed resolve to suppress the extremist identity Pakistan has assumed as a state. If this was a gesture toward India it seemed to have worked because the joint Indus Waters Treaty commissioners’ meeting ended cordially on March 21 with India agreeing to revise the plan of a dam Pakistan had objected to.

Pakistan can yet do more to shift out of its frozen military strategy of hanging its entire foreign policy on hatred of India. It can break out of its current regional and global isolation by adopting the posture of its friend China and invite India to join the trading corridor China is building in the country. It can also revive the snagged gas pipeline project with Iran by inviting India back into it, also offering it the trade route India wants to Afghanistan and Central Asia through its territory. Instead of joining China against the U.S. in their latest global standoff, it can act as a facilitator by joining the Russo-Chinese camp without scrapping its traditional partnership with Washington. And last but not least; it can get rid of its proxy terrorists to disarm the entire western civilization scared of an Islamic assault with Pakistan’s “nuclear-tipped” backing.

A very good article.
Pakistan has to move past its paranoia.
What is good for business can be good for the people. We must not however continue to neglect the poor . Over population, education, healthcare and wealth distribution must become priorities in tandem with accumulating wealth. Otherwise the gathering of wealth to continue weaponising while making life even more luxurious for the rich and powerful will be a meaningless exercise.