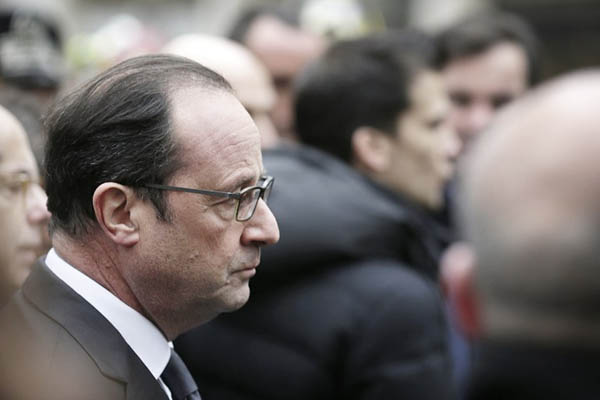 The offices of Charlie Hebdo had been fire bombed in 2011 when it published a blasphemous cartoon.

At least 12 people were killed when gunmen armed with Kalashnikovs and a rocket-launcher opened fire in the offices of French satirical weekly Charlie Hebdo on Wednesday, said sources close to the investigation.

The prosecutor’s office confirmed that “at this stage” 10 people had been killed without detailing how many had been injured. Another source close to the investigation said the number of dead had reached 12.

Deputy Mayor of Paris Bruno Julliard earlier said “six people are seriously injured,” including a policeman. It was not clear whether these now figured among the dead.

French President Francois Hollande arrived at the scene of the shooting after rushing there and calling an emergency cabinet meeting, the presidency said. The government also raised its alert level to the highest possible in the greater Paris region.

British Prime Minister David Cameron has condemned the “sickening” attack. “The murders in Paris are sickening. We stand with the French people in the fight against terror and defending the freedom of the press,” he said in a message on Twitter.

A source close to the investigation said two men “armed with a Kalashnikov and a rocket-launcher” stormed the building in central Paris and “fire was exchanged with security forces.” The source said a gunman had hijacked a car and knocked over a pedestrian while attempting to speed away.

The publication’s cartoonist Renaud Luzier earlier said there were “casualties” after the incident.

The satirical newspaper gained notoriety in February 2006 when it reprinted cartoons of Islam’s Prophet that had originally appeared in Danish daily Jyllands-Posten, causing fury across the Muslim world. Its offices were fire bombed in November 2011 when it published a cartoon of Islam’s Prophet under the title Charia Hebdo.

Despite being taken to court under anti-racism laws, the weekly continued to publish controversial cartoons.

In September 2012 Charlie Hebdo published several blasphemous cartoons as violent protests were taking place in several countries over a low-budget film, Innocence of Muslims, which was made in the United States.

French schools, consulates and cultural centers in 20 Muslim countries were briefly closed along with embassies for fear of retaliatory attacks at the time. Editor Stephane Charbonnier has received death threats and lives under police protection.