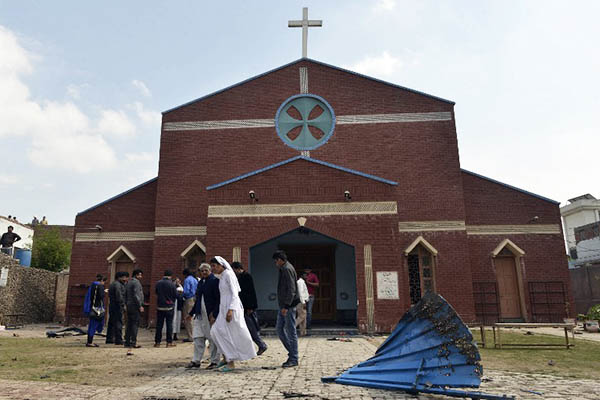 Five men have been taken into custody for helping plan and stage the attacks in Youhanabad earlier this year.

A provincial minister on Tuesday said police had arrested five men suspected of involvement in the twin Taliban suicide attacks that targeted two churches in Lahore in March.

Seventeen people died as a result of the suicide bombings in the Youhanabad district, with more than 70 wounded. The bombings occurred during prayers at two churches located around half a kilometer apart in a neighborhood that is home to more than 100,000 Christians, officials said. Two men were later lynched by an angry mob, who suspected they were militants.

The attack also sparked two days of rioting by thousands of Christians who clashed with police, blocked roads and forced a partial shutdown of the city’s public bus system.

“Police have arrested five suspects who were involved in Youhanabad attacks, a bomb attack in Model Town area and another attack in Qila Gujjar Singh area of Lahore,” Shuja Khanzada, home minister of Punjab province, told reporters. “They belonged to the splinter group of Tehreek-e-Taliban Pakistan (TTP), Shehryar Mehsud group and had been coordinating attacks inside Pakistan from Afghanistan,” Khanzada said. “They planned these attacks in Afghanistan and then came to Lahore. They were provided suicide vests and other materials here in Lahore for the attack.”

Khanzada claimed that the militants had financial and material support from neighboring India. “They have also confessed planning some more attacks in Lahore and Karachi in future,” he said.

Christians, who make up around two percent of Pakistan’s mostly Muslim population of 180 million, have been increasingly targeted in recent years, often over allegations of blasphemy. Lahore’s attacks were the worst on the community since a devastating double suicide bombing in Peshawar in September 2013 killed 82 people.