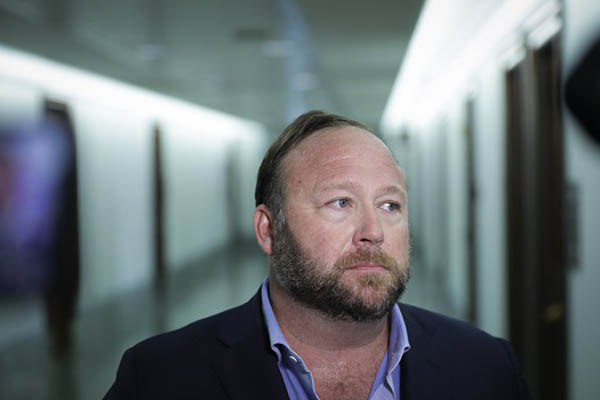 Twitter on Thursday said it had permanently banned Alex Jones, the far-right conspiracy theorist best known for calling the 9/11 attacks an inside job and describing the Sandy Hook school massacre as a hoax.

In a series of tweets from its @TwitterSafety account, it said: “Today, we permanently suspended @realalexjones and @infowars from Twitter and Periscope. We took this action based on new reports of Tweets and videos posted yesterday that violate our abusive behavior policy, in addition to the accounts’ past violations.”

Reacting to his removal on Infowars, Jones said: “I was taken down not because we lie but because we tell the truth,” adding that the incident involving the journalist, Oliver Darcy, may have been the cause of the ban.

Jones harangued Darcy for 10 minutes during the confrontation, calling him a “virus to America” and comparing him to a “possum that climbed out of the rear-end of a dead cow.”

Darcy had written an article listing incidents where Jones had violated Twitter’s rules.

The ban came a day after President Donald Trump’s administration warned of a possible legal crackdown on big technology companies over political bias in a bombshell announcement that came as the Senate hearing concluded. Trump famously granted Jones an interview during his presidential campaign, telling him: “Your reputation is amazing” and “I will not let you down.”

Twitter had previously resisted calls to remove Jones, who had nearly 900,000 followers, though in August it prevented him from posting on his account for a week.

Once dubbed “the most prolific conspiracy theorist in contemporary America” by the Southern Poverty Law Center, Jones has claimed the September 11 attacks were carried out by the U.S. government, and promotes the idea that ethnic minorities are attempting to eradicate the white race. He has also called the 2012 Sandy Hook school massacre an elaborate hoax involving “crisis actors” as part of a plot to discredit the gun lobby.

Gunman Adam Lanza killed 26 people, including 20 children, when he launched his rampage at the Connecticut school. Several of the families have sued the 44-year-old Texan, accusing him of using their suffering to expand his audience. Jones has counter-sued, demanding in turn that they pay his court expenses.

The non-profit Media Matters, a left-leaning watchdog, welcomed Twitter’s move. “Media Matters has monitored Alex Jones longer than anyone and has dozens of documented incidents of him violating the rules with impunity, so the most important thing to be said about his removal from Twitter is: ‘Good. It’s about time.’ Twitter was the last major tech platform to see what is obvious—Jones used Twitter in clear violation of the rules to perpetuate hate speech and harassment,” it added.

Jones’ ban from the last major social network to host him could also heighten conservatives’ fears that their viewpoints are being censored online.

The Justice Department’s announcement on Wednesday that it would probe Big Tech over competition or political bias appeared to escalate a war between the administration and Silicon Valley after a series of attacks by Trump claiming tech firms were biased against him and others on the right.

According to the statement, Attorney General Jeff Sessions will convene a meeting of state attorneys general later this month “to discuss a growing concern that these companies may be hurting competition and intentionally stifling the free exchange of ideas on their platforms.”

The announcement came at the conclusion of a Senate Intelligence Committee hearing at which Dorsey and Sandberg testified in a largely collegial atmosphere and spoke of the need for further efforts to thwart foreign influence campaigns on social media.