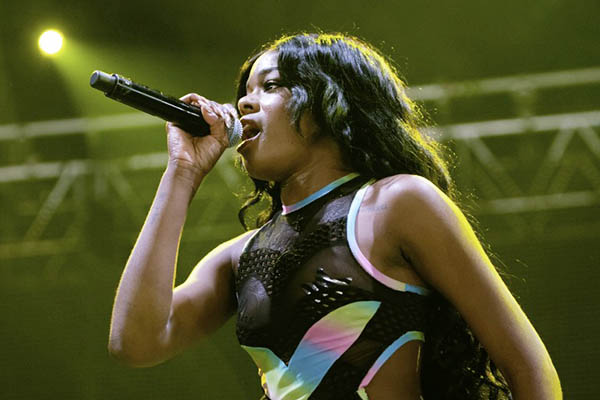 Twitter on Thursday suspended the provocative rapper Azealia Banks after she went a step too far by launching racist attacks on former One Direction heartthrob Zayn Malik.

The Twitter account of @AZEALIABANKS returned a message saying that it was suspended with a link to the service’s conditions, which lists “abusive tweets and behavior” as a reason for temporary removal.

The New York artist has been long been a controversial and prolific presence on Twitter, attacking fellow rappers—notably Iggy Azalea—and once urging the burning down of homes of ancestors of slave traders. But she appeared to cross a line late Tuesday when she used epithets related to Muslims to attack Zayn, whom she accused of copying her style.

Banks, who is African-American, at one point boasted that the U.S. military would kill the family of Zayn, a Briton who is partially of Pakistani descent and who has gone solely by his first name since leaving the boy band.

Banks on Wednesday stopped short of an apology but said she was angered that Zayn would not engage with her on Twitter and renewed accusations of stylistic plagiarism.

Numerous Twitter users had called for Banks’ suspension—a rare move by the California-based company which encourages boisterous conversations—and a festival in London, Rinse/Born & Bred, canceled her appearance next month.

The rapper won acclaim for her track “212”—a biting track about wooing a woman away from a man and then mocking his sexuality—but has since been better known for provocative online remarks. She has previously come under fire for using homophobic language, even though she identifies as bisexual.

She has also raised eyebrows by throwing her support behind Republican presidential candidate Donald Trump, a fellow aficionado of acerbic Twitter exchanges, and for sweeping denunciations of Australian audiences.

Banks on Thursday still had verified accounts on Instagram and Facebook, although she has not posted since her initial criticism of Zayn.