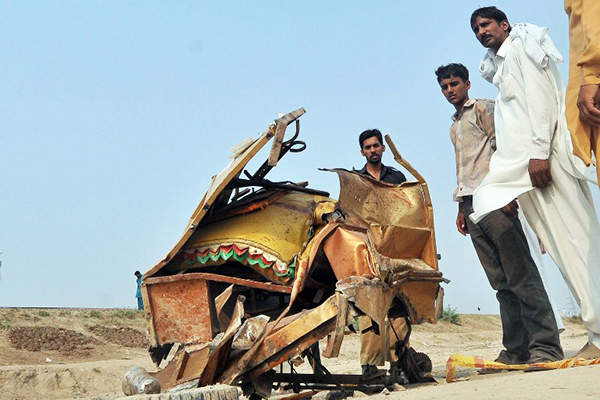 At least 14 people, including two children, were killed on Saturday after a train collided with a packed rickshaw in Sheikhupura.

The rickshaw was crammed with 16 people and drove onto the track moments before the Lahore-bound train passed through. The train had started its journey from Karachi.

“Twelve people died on the spot. Four people with critical injuries were taken to hospital, of whom two expired,” said Muhammad Asim, a senior doctor at the local hospital. “Two of them were children under 12,” he said adding that many bodies were mutilated and unable to be identified.

“The accident occurred in Khanpur town of Sheikhupura district,” said local police official Salim Niazi. “There was [neither a] gate at this crossing [nor] a man to stop the traffic to clear way for the train,” he said, highlighting the woeful state of the country’s railways.

Rescue officials confirmed the death toll. “Our staff is busy in evacuating the injured and dead bodies,” said Jam Sajjad, a spokesman for the rescue department.

Pakistan maintains a poor railway system based on a British-era track and old coaches. Pakistan Railways is hounded by low safety standards and unsatisfactory facilities. Accidents are common. Last year, at least two people were killed and dozens injured when two trains collided near Karachi on Sept. 17.

Its highly irresponsible of the staff to post current news with previous year’s pictures.Kindly pay attention to this matter

May ALLAH rest their soul in peace.

why are you posting old pictures for this accident.