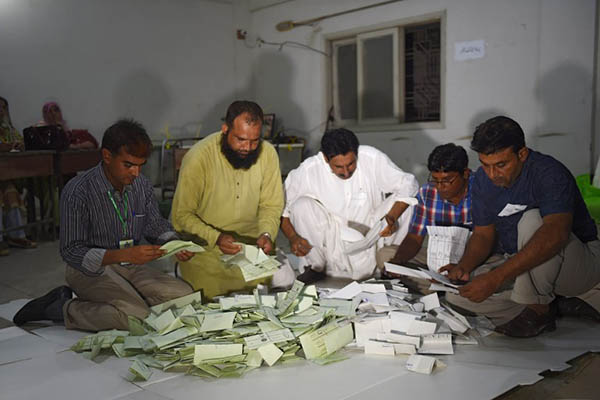 Massive delay in vote results undermines legitimacy of exercise, according to observers

Pakistan on Friday awaited the delayed results of pivotal elections that have already seen a jubilant Imran Khan claim victory, despite allegations of massive vote rigging in favor of the cricket hero-turned-politician.

Election officials are under fire for the lack of a result two days after ballots closed, an unprecedented delay that observers say has undermined the legitimacy of the exercise. The vote is the third consecutive democratic transition in the country, which has been ruled by the Army for roughly half its history, but has already been marred by violence and allegations of interference.

The Election Commission of Pakistan has dismissed allegations of manipulation—blaming the delay on glitches in new, untested counting software—and said there would be a result by Friday.

International observers, including a European Union delegation, are due to give their preliminary assessments of the vote on Friday, after rival parties, including the outgoing Pakistan Muslim League (Nawaz), alleged “blatant” rigging.

The Election Commission says that with more than 80 percent of the vote counted, Khan’s Pakistan Tehreek-e-Insaf (PTI) party enjoys a strong lead with 109 seats so far.

However, it is not certain it will achieve the 137 seats needed in the National Assembly to form a majority government, and may be forced into a coalition.

That did not stop the 65-year-old former cricket star from claiming victory in a wide-ranging address to the nation on Thursday. “We were successful and we were given a mandate,” he said from his home in Islamabad, adding in a conciliatory note that there would be “no political victimization” of his opponents in the future.

The former all-rounder’s statement came after his supporters took to the streets to celebrate winning an election that opponents have said was fixed for him.

Late Wednesday, the once-mighty PMLN, which had been in power since 2013, rejected the results and vowed it would mount a legal challenge. Other major parties—including the Pakistan Peoples Party (PPP), which could prove kingmaker in a coalition government—have also alleged the count is being manipulated.

The delay in the results, an unofficial version of which had been expected late Wednesday, has forced election authorities to hold multiple press conferences to defend themselves. “The election was conducted in a fair and free manner,” said secretary Babar Yaqoob on Thursday.

The military has not yet commented on the situation, but the armed forces and Khan have previously denied allegations of intervention.

The controversy follows a campaign already considered by some observers to be one of the “dirtiest” in Pakistan’s history because of allegations against the military, and marked by the increased visibility of extremist religious parties.

A PTI win would represent an end to decades of rotating leadership between the PPP and PMLN that was punctuated by periods of military rule.

Khan, who captained Pakistan to their cricket World Cup victory in 1992, campaigned on promises to end widespread graft while building an “Islamic welfare state.” But he was dogged by the accusations he was benefiting from a “silent coup,” which the PMLN has said it was the target of.