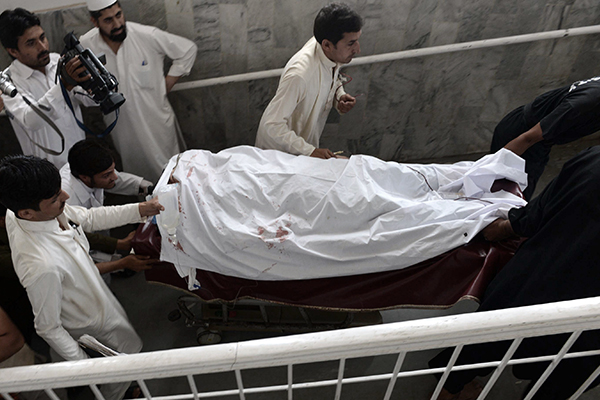 A female health worker being moved after an attack in Peshawar on May 28. A. Majeed—AFP

A bomb hit a police van protecting a polio vaccination team in northwest Pakistan on Monday, killing two people and wounding 12 others.

The attack took place on the third and last day of a U.N.-backed vaccination campaign in a suburb of Peshawar, police said, adding that a policeman was among the two dead.

“It was an IED blast and the target were policemen,” said Najeebur Rehman, a senior police official, adding that the bomb went off just as officers reached the village to provide security to polio teams.

Nasir Durrani, police chief for Khyber-Pakhtunkhwa province, confirmed the incident and death toll: “Most of those wounded were policemen.” Raheel Shah, another police official, said that polio workers remained safe in the attack as they were inside a health unit in the village.

Pakistan is one of only three countries in the world where polio is still endemic, but efforts to stamp out the crippling disease have been hampered by resistance from militant groups, who have banned vaccination teams from some areas.