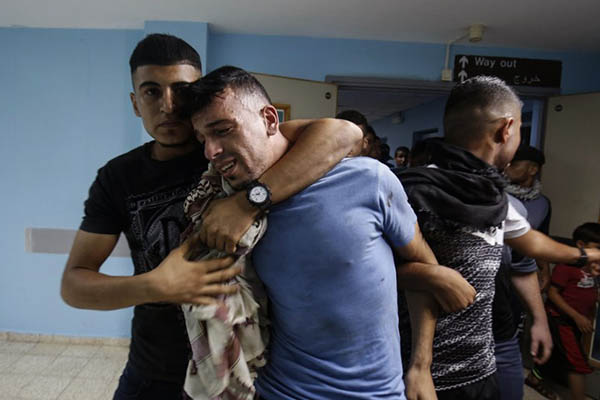 Israeli army claims it was retaliating over rocks, grenade thrown at soldiers

Ministry spokesman Ashraf al-Qudra told AFP a Palestinian youth aged about 13 was shot in the head near the town of Khan Yunis in the Gaza Strip, without giving his name or exact age. He added that 24-year-old Mohammed al-Hamayda was fatally wounded in the stomach by Israeli fire in a separate incident east of Rafah.

The Israeli army said that throughout the afternoon, “thousands of Palestinians participated in extremely violent riots and committed various acts of terror in several locations along the Gaza Strip security fence.”

An English-language statement said a hand-grenade and rocks were thrown at soldiers. Israeli forces responded with “large amounts of riot dispersal means and in specific cases where these means did not succeeded in negating the threat, resorted to live fire in accordance with the standard operating procedures,” it said.

The army said the reported death of the boy would be examined.

Since protests broke out along the Gaza border on March 30, at least 137 Palestinians have been killed by Israeli fire. The majority were involved in protests but others were seeking to breach or damage the border fence.

No Israelis have been killed.

On Thursday, Abdel Fattah Abu Azoum, 17, was hit in the head by fire from an Israeli tank near Rafah in southern Gaza. The Israeli army said he and a companion were trying to break through the border fence.