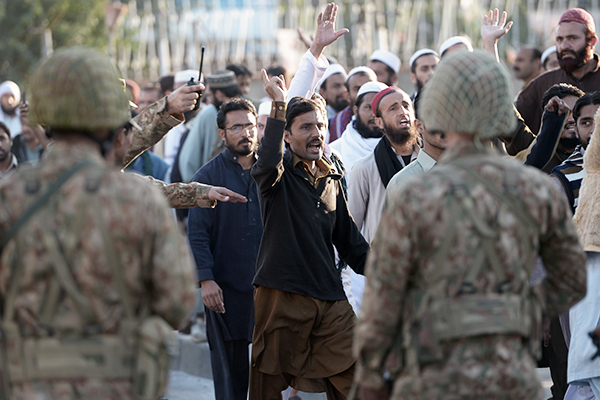 Gunmen killed two people on Monday at a rally in Kohat, Khyber-Pakhtunkhwa, called to protest against Friday’s deadly sectarian clashes in Rawalpindi.

The shooting happened while activists from Ahl-e-Sunnat Wal Jamaat, a Sunni Muslim organization, were demonstrating against the Rawalpindi violence—which left nine people dead—near an Imambargah.

“The activists were rallying against the Rawalpindi violence when unidentified gunmen opened fire on the procession from near a Shia mosque in the area, killing two people,” said Saleem Khan Marwat, the district police officer. He said the Jamaat activists retaliated by firing in the air, causing mayhem. “The city has been closed and the Army called in to handle the situation.”

Police and troops cordoned off the area and ordered markets closed. “Curfew has been imposed in Kohat with immediate effect and the Army called in,” a senior security official in Peshawar also confirmed.

Pakistan is facing rising sectarian violence with Sunni militant groups, linked to Al Qaeda and the Taliban, often attacking Shia gatherings. The Shia make up some 20 percent of the country’s overwhelmingly Muslim population.