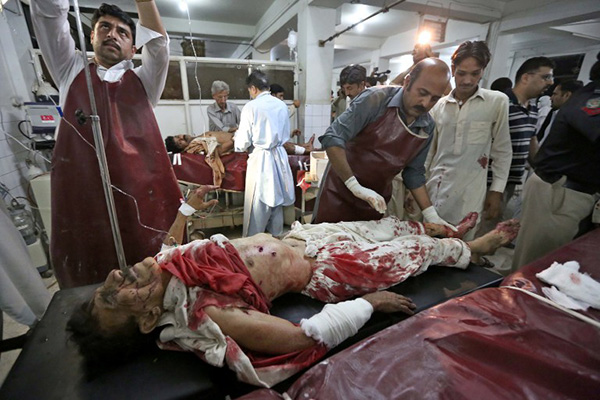 No claims of responsibility for remote-controlled bombing that has left 17 injured in Peshawar.

Two people were killed and over a dozen wounded when a bomb exploded in northwest Pakistan late Tuesday, police and hospital officials said.

The low-intensity bomb was detonated by a remote-control device in the Imamia Colony neighborhood of Peshawar, the capital of Khyber-Pakhtunkhwa province, senior police official Khalid Mahmood Hamdani said.

“It was a remote-controlled device planted on a motorbike which went off in a street,” said Hamdani. Two people were killed and over a dozen others were wounded, he said adding that the blast partially damaged three nearby houses.

Dr. Jamil Shah, spokesman for the city’s Lady Reading Hospital, confirmed the toll. “We received two bodies and 17 injured, two of them are in critical condition,” he said.

The device carried about four kilograms of explosives, according to chief of the city’s bomb disposal squad Shafqat Malik. The bomb was planted on a motorbike, he confirmed.

No one immediately claimed responsibility for the blast.

Al Qaeda and Taliban-linked militancy has long plagued Khyber-Pakhtunkhwa and the country’s military has staged numerous operations against the insurgents.