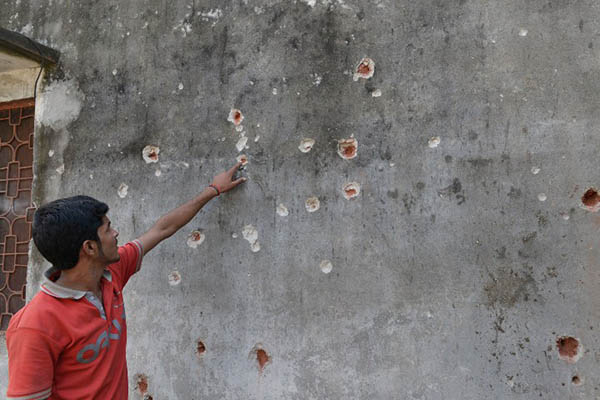 A Pakistani points to bullet holes in the wall of his home, allegedly caused by Indian firing, near Sialkot. Arif Ali—AFP

A teenage Pakistani girl and an Indian woman were killed as troops traded fire along their tense border on Saturday, the latest in a series of deadly clashes, officials said.

The incident, which also left 11 people wounded, comes a day after New Delhi claimed a Pakistani fishing crew suspected of involvement in “illicit” activities blew up their boat after trying to evade capture at the hands of the Indian navy.

Tension between the South Asian rivals escalated Wednesday when an Indian border guard and two Pakistani paramilitary soldiers were killed during another exchange of fire in the same area. The shelling intensified Saturday, necessitating “evacuation of hundreds of people” living in the border areas of Samba and Hiranagar to camps in safer places, said Rajesh Kumar, a senior police official in Indian-administered Kashmir.

“Ten civilians have been injured and a woman succumbed to injuries due to firing from Pakistan,” said Kumar. On the other side, the Pakistani military said its paramilitary forces responded “befittingly” to Indian fire.

Recent exchanges of fire across the de facto border between India and Pakistan in Kashmir, which both countries administer in part but claim in full, have killed around two dozen civilians on both sides and forced thousands to flee their homes on both sides.

India’s Home Minister Rajnath Singh accused Pakistan of violating the ceasefire agreement after Saturday’s incident. “We are stretching our hands for friendship with Pakistan but despite this we don’t understand why the ceasefire is violated by Pakistan,” he told reporters.

The neighbors, who have fought two wars over Muslim-majority Kashmir, have traded blame for the upsurge in firing and shelling which started on Oct. 6 last year. India called off peace talks in August after Pakistan first consulted Kashmiri separatists, a move some saw as a sign of a tougher stance by Prime Minister Narendra Modi’s new rightwing government.