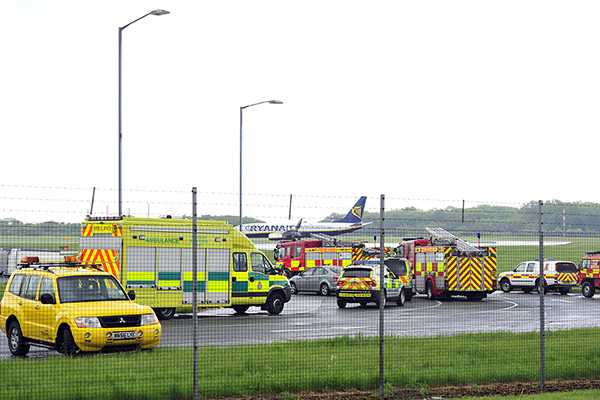 British nationals threatened to blow up PK-709 after being asked to calm down.

Two men arrested on a Pakistan International Airlines plane after fighter jets were scrambled to escort it to a London airport remained in custody on Saturday as police questioned them over their actions.

Armed police officers boarded the Boeing 777 and arrested two male British nationals, aged 30 and 41, on suspicion of endangering an aircraft after the plane, which was carrying 297 passengers from Lahore to Manchester, was diverted to Stansted airport outside London. The incident was not believed to be terror-related. An airline source claimed the incident had stemmed from a family row on board.

“There was a family of eight to 10 people on the plane and they were quarrelling among each other,” the PIA source said. “When PIA staff approached them and asked them to calm down, they told them to go away otherwise they would blow up the plane,” he added. “PIA staff became scared and they raised the alarm to avoid any untoward situation.”

Police said they were alerted 10 minutes before the plane was due to land in Manchester at 1:30 p.m. on Friday. They were told a threat had been made to the safety of an aircraft.

Fighter jets were scrambled to escort flight PK-709 into Stansted, London’s third-biggest airport, where it touched down at 2:15 p.m. It halted in a designated safe location away from the terminal building.

The arrested men were immediately taken to a police station “where they will remain in custody pending interview by detectives,” the local Essex Police force said. The remaining passengers disembarked under police escort and were taken to the terminal building for a debriefing.

“The plane will remain at its current location and will be subject to forensic examination by specialist officers,” the police said. “At this point in time no suspicious items have been recovered,” they said, adding, “This incident is being treated as a criminal offence.”

A Ministry of Defense spokesman said that Typhoon fighter jets had been launched from a Royal Air Force base after the plane’s crew flagged the incident. “Typhoon aircraft from RAF Coningsby have been launched to investigate an incident involving an aircraft in U.K. airspace,” the  spokesman said. Typhoons can be scrambled if the pilot or crew of a passenger aircraft sends out a passenger signal, he added. “The purpose of going up is to investigate what the situation is,” he said. “Often when a Quick Reaction Alert aircraft is launched the details are not known, but it is known that a signal has been sent.”

Typhoons patrolled over London last year when the city hosted the 2012 Olympic Games.

The picture accompanying this article is incorrect. You’re showing a “Ryanair” airliner. PIA’s giant 777 has a different livery. Wrong plane. If it had been Ryanair, they would have charged the police to board the plane!