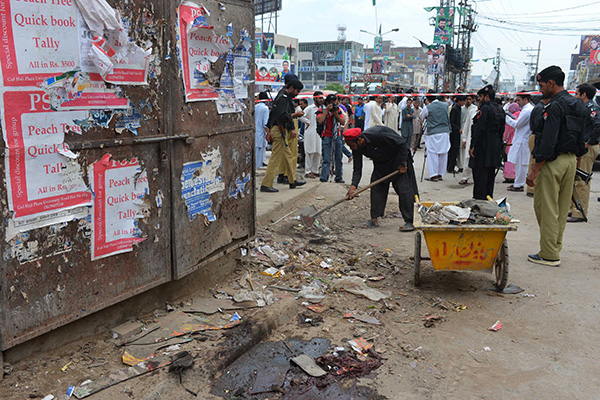 A Pakistani candidate running for Parliament in next week’s elections was injured on Saturday as his vehicle hit a roadside bomb in the troubled northwest, officials said.

Raj Mohammad, a National Assembly candidate from the hardline Jamaat-e-Islami party, was campaigning in the lower Orakzai agency area of the restive northwestern tribal belt when his vehicle hit an improvised-explosive device. “Mohammad and his driver were injured in the attack and their vehicle was badly damaged,” said Wali Mohammad, a local government official. “The victims are out of danger and had no life-threatening wounds,” he said.

In a separate incident, an election office of the cricketer-turned-politician Imran Khan’s Pakistan Tehreek-e-Insaf party was attacked in Peshawar. Police said that around five kilograms of explosives were planted outside a PTI area office and exploded in the early hours of the morning. “The gate and a few chairs were damaged in the blast, but nobody was hurt because the office was empty at that time,” said Khalid Mehmood, a senior police official.

On Friday, National Assembly candidate Saddiq Zaman Khattak was shot dead along with his 3-year-old son after praying in a mosque in Karachi, police said. Khattak was a businessman and a candidate for the Awami National Party. A party leader said he had previously received threats.

Pakistani Taliban claimed responsibility for that attack and threatened further attacks on the ANP and its outgoing coalition partners, the Pakistan Peoples Party and the Muttahida Qaumi Movement.

Campaigning has been marred by Taliban threats and attacks, which have killed 63 people since April 11, according to an AFP tally. Interim Prime Minister Mir Hazar Khan Khoso addressed a press conference on Friday in which he assured the people of Pakistan that the elections would proceed on time and the interim setup would not extend its mandate.