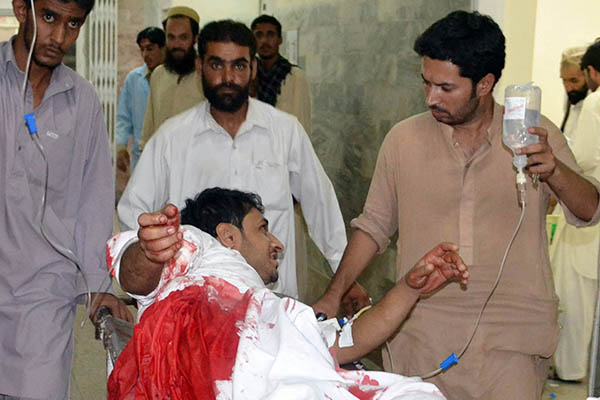 No group has yet claimed responsibility for the sectarian attack.

Gunmen killed two people from the Shia community on Monday when they opened fire on a taxi in Quetta, which has been gripped by a wave of sectarian bloodshed, police said.

The attack was mounted on busy Iqbal Avenue in the southwestern city, the capital of Balochistan province where the surge in sectarian unrest has killed scores of Shias in the past few years.

Elsewhere in Balochistan, two people were killed and three wounded in a bomb attack on a mosque close to the customs offices at the Chaman border crossing to Afghanistan.

“The driver and a passenger boarding taxi cab, both were Shia. They died after unknown gunmen fired at their car,” Fayyaz Sumbal, a senior police official in Quetta, said of the attack in that city. He said the two attackers were waiting for the taxi to arrive at the busy avenue and escaped on a motorbike after spraying bullets at the vehicle.

There was no immediate claim of responsibility. Lashkar-e-Jhangvi, a militant group officially banned by the government in 2002, usually claims responsibility for attacks on Shia Muslims.

Balochistan is a flashpoint for violence between Pakistan’s majority Sunni Muslims and minority Shias, who account for 20 percent of the country’s 180 million population.

Senior local official Ibrahim Baloch gave the death toll in the Chaman bombing and said a second bomb was found in the area. “We suspect that one of the dead people was a person trying to plant the bomb, but we can’t confirm this suspicion at the moment,” he said.