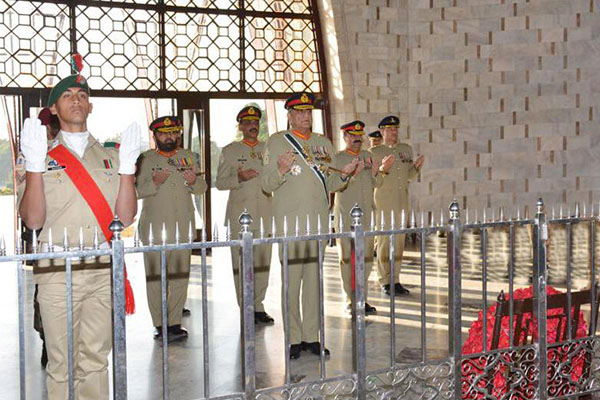 During a visit to the Quaid’s mausoleum in Karachi on the occasion of the Pakistan founder’s 144th birthday, the Army chief said the residents of Pakistan “can’t thank him [Quaid] enough.” In a tweet shared by Inter-Services Public Relations Director General Maj. Gen. Asif Ghafoor, Bajwa was quoted as saying: “Quaid’s vision about creation of Pakistan based on Two-Nation Theory is an even more acknowledged reality today.” He added: “We can’t thank him enough for having got us Pakistan.”

According to the ISPR statement, the Army chief said Jinnah’s vision would always serve as a guiding light for Pakistan. “Even in most difficult times, all Pakistanis, including minorities, have come together without compromise on respective identity. His [Jinnah’s] vision will always guide the way for us to take Pakistan ahead following principles of faith, unity and discipline,” he added.

Sir Syed Ahmed Khan first introduced the Two-Nation Theory in 1867. It was then taken up by Hindu nationalist and member of the rightwing Rashtriya Swayamsevak Sangh, Veer Savarkar, in 1939 when he voiced his support for separate nations for Hindus and Muslims. It was subsequently adopted by Jinnah as a guiding principle of the Pakistan Movement.

The government of India had initially rejected the theory, saying it’s constitution was secular and did not seek to marginalize any minority populations. Recent moves by the incumbent Bharatiya Janata Party, under the rule of P.M. Narendra Modi, have proven the reality of the theory. Amid mob lynchings over the suspected slaughter and sale of cow meat, the revocation of the special autonomy guaranteed to Jammu and Kashmir, and a controversial citizenship law that seeks to discriminate against Muslims, the world is increasingly questioning the so-called secular identity of India.

Prime Minister Imran Khan has repeatedly warned the world that the Modi government is seeking to establish a Hindu nation where all other religions would be deemed second-class citizens. On Quaid’s birthday, he urged Pakistanis to unite in accordance with Jinnah’s vision. “Today, on Quaid-e-Azam’s birthday, we as a nation must resolve to build Pakistan in accordance with his vision of an Islamic welfare state based on compassion and human dignity; justice and rule of law; and a plural, inclusive society,” he posted on Twitter. “All our young aspiring leaders should make our Quaid their role model. He was Sadiq and Ameen; and his 40-year struggle was not for personal gain but to achieve a homeland for the Muslims of the subcontinent where they could live as free citizens second to none,” he added.