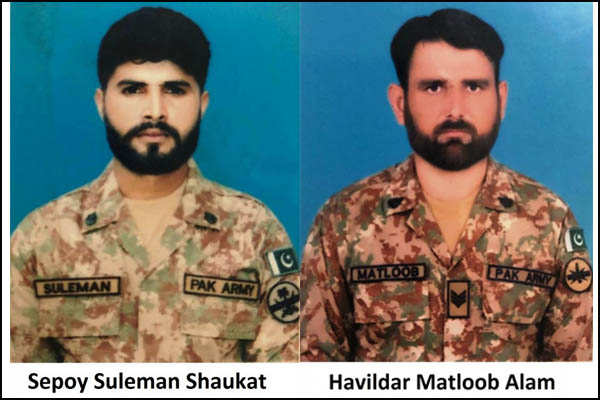 Two soldiers of the Pakistan Army embraced martyrdom early on Thursday morning after terrorists opened fire on a checkpost in South Waziristan, according to a press release issued by the Inter-Services Public Relations (ISPR).

The attack targeted a checkpost near Pash Ziarat, read the statement. It said that security forces had immediately responded to the assault, adding that two soldiers had embraced martyrdom during exchange of fire.

“Another soldier was injured in the attack,” it said. “Operating is in progress for area clearance,” it said.

The soldiers who were martyred have been identified as Havaldar Matloob Alam, 32, and sepoy Suleman Shaukat, 25.

There has been a marked increase in attacks on security forces in various of Pakistan in the past few months. A joint press conference of Foreign Minister Shah Mehmood Qureshi and ISPR DG Maj. Gen. Babar Iftikhar last week alleged that India was funding and arming the terrorists in a bid to destabilize Pakistan and encourage unrest.