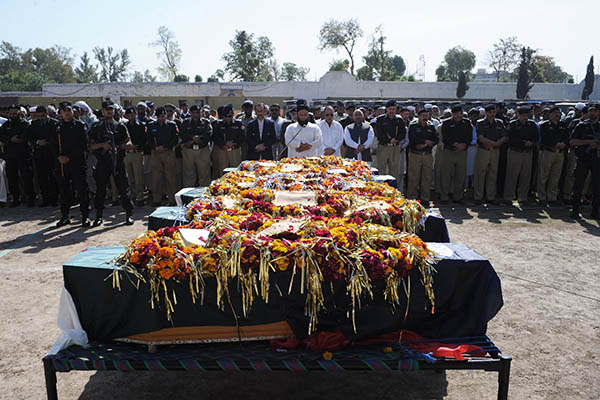 One suspected terrorist killed after police exchange fire with the three men who targeted patrol vehicle.

At least two policemen were killed on Wednesday night after suspected terrorists attacked a patrol vehicle in Peshawar, according to a senior police officer.

“A police van was on routine patrol when it was attacked in the Wahidabad area of Chamkani,” said Ejaz Khan. He said three men, believed to be affiliated with terror outfits, targeted the police and killed two officers on the spot. “One attacker was killed after police retaliated,” he added.

According to Khan, another policeman was injured but is currently in stable condition at the Lady Reading Hospital in Peshawar.

“This attack could have been retaliation for the ongoing military operation in North Waziristan,” said chief of police in Peshawar, Nasir Durrani. “But we not be deterred and will face all terrorists and arrest or kill them wherever they might be found,” he told police officers at the funeral for the two deceased men. “Such attacks cannot demoralize us.”