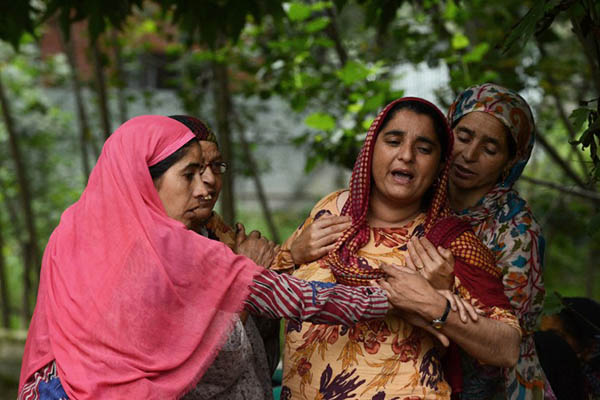 A protester killed by BSF soldiers after locals come out against security forces’ action.

The soldiers came under fire after they surrounded Ratnipora village overnight Monday following a tip-off that militants were in the area. Hundreds of villagers poured onto the streets when the gunbattle resumed at first light, throwing rocks at police and chanting “We want freedom!” a police officer said on condition of anonymity.

Officers fired tear gas and live rounds into the air to disperse the crowds before soldiers finally gunned down the militants in paddy fields, the officer said.

“Two terrorists were killed, and the encounter has ended. Both are locals,” said Javaid Gillani, inspector general of police for the region, adding that a policeman was injured. “There was a lot of stone pelting in the area,” Gillani told AFP.

“Following the gun battle, a BSF deployment came under heavy stone throwing… [they] fired in response in which one protester was killed,” Nitish Kumar, deputy inspector general of police for the region, told AFP.

Government forces have been on heightened alert in the southern Kashmir valley, where police say sizeable and locally trained armed groups have been operating for months. In July a group of 11 armed militants wearing army fatigues posed for photos and a video, which were posted on Facebook.