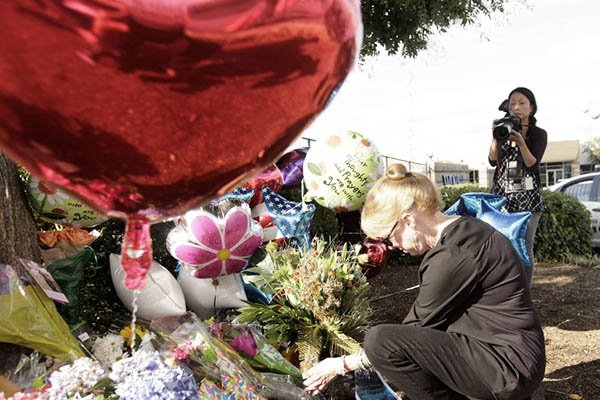 Gunman was a former reporter who died from a self-inflicted gunshot wound.

A former reporter fired by a Virginia television station shot dead two of its journalists during a live broadcast Wednesday and posted chilling footage of the crime online before fatally shooting himself.

The gunman—Vester Lee Flanagan, 41, also known as Bryce Williams—died in a hospital from a self-inflicted gunshot wound after being taken into custody by state police following an intense morning manhunt across the state.

Reporter Alison Parker, 24, and cameraman Adam Ward, 27, were fatally shot at close range while conducting an on-air interview for WDBJ, a CBS affiliate in Roanoke, about 240 miles southwest of Washington. The killings once again highlighted gun violence in America—prompting a quick White House call for action—and also raised questions about how the Internet provided a brief but unfiltered window on a horrific crime.

“It breaks my heart every time you read or hear about these kinds of incidents,” President Barack Obama told an ABC affiliate in Philadelphia.

In a rambling manifesto sent to ABC News in New York, Flanagan—an African-American sacked in 2013 by WDBJ—said he was sent over the edge by the June mass shooting of black worshippers at a church in South Carolina. Describing himself as a “human powder keg… just waiting to go BOOM!!!!” Flanagan also complained in what he called a “Suicide Note for Friends and Family” of racial discrimination and bullying “for being a gay, black man.”

The disturbing video of the deadly on-air shooting—apparently filmed by Flanagan himself—was posted on Twitter and Facebook. The footage, seen by AFP, was later taken down.

“You send people into war zones and into dangerous situations, into riots, and you worry that they’re going to get hurt,” WDBJ general manager Jeffrey Marks told CNN. “You send somebody out to do a story on tourism, and this—how can you ever expect something like this to happen?”

Parker was talking to Vicki Gardner, head of the Smith Mountain Lake Chamber of Commerce, at the lakeside Bridgewater Resort in the town of Moneta near Roanoke when the attack occurred. Several shots were heard, as well as screams, as Ward’s camera fell to the floor, capturing a fuzzy and chilling glimpse of the gunman pointing his weapon at the ground. The station then hastily cut away to a startled anchorwoman back in the studio.

Later, a video posted under the Twitter account @bryce_williams7, showed the shooter brandishing a weapon at Parker, who was interviewing Gardner. Both she and Ward apparently did not see the shooter. Multiple shots are then heard, and screams. Parker runs away. The shooter’s hand is clearly visible. He appears to be wearing a blue-checkered shirt.

Gardner, 62, was in stable condition, according to Chris Turnbull, a spokesman for the hospital in Roanoke where she was being treated.

ABC News said it received a 23-page manifesto from a man identifying himself as Bryce Williams nearly two hours after the shooting. A man later called the network and said he had shot two people. He said authorities were “after me” and “all over the place” before hanging up, ABC said.

“The church shooting was the tipping point… but my anger has been building steadily… I’ve been a human powder keg for a while… just waiting to go BOOM!!!!” the statement said. “Yes, it will sound like I am angry… I am. And I have every right to be. But when I leave this Earth, the only emotion I want to feel is peace…” it added.

Marks, the station manager, said Flanagan was dismissed “after many incidents of his anger coming to the fore.”

Parker’s boyfriend, WDBJ anchor Chris Hurst, said on Twitter that he was “numb.”

The cameraman’s fiancée, Melissa Ott, a producer at the TV station, was in the control room when the shooting occurred and watched it unfold, Marks told CNN. Ott was working her last day at WDBJ before moving on to another station in another city, and looking forward to a farewell party with her colleagues.

“This was going to be a day of celebration for her time here and wishing her good luck,” Marks said, adding staff was very emotional and planning a memorial gathering.

The shooting, which took place not far from the scene of the Virginia Tech University mass killing in April 2007, launched a fresh round of hand-wringing about gun control in America.

Obama, who has talked openly about his frustration at not making headway in gun-control laws, said: “What we know is that the number of people who die from gun-related incidents around this country dwarfs any deaths that happen through terrorism.”

Even in the face of mass shootings, U.S. lawmakers have been hesitant to enact tougher limitation on access to arms, in part because they are loath to anger constituents who fiercely defend their constitutional right to bear arms. “There are some common sense things that only Congress can do that we know would have a tangible impact,” White House spokesman Josh Earnest told reporters.

“We have got to do something about gun violence in America,” she said on the campaign trail.