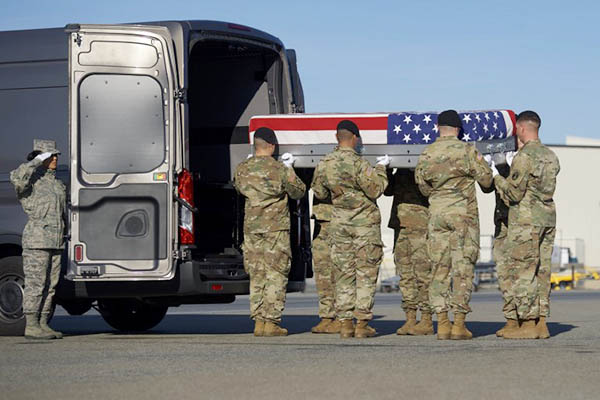 Two U.S. service members were killed in Afghanistan on Friday, NATO said, in the latest casualties to hit the international coalition amid ongoing peace talks between Washington and the Taliban.

NATO’s Resolute Support mission would not immediately release any details about the soldiers but said they had been killed during an unspecified “operation” in the country.

“In accordance with U.S. Department of Defense policy, the name of the service members killed in action are being withheld until 24 hours after notification of next of kin is complete,” said NATO.

The deaths come a day after at least six people were killed by blasts in an Islamic State-claimed attack during Persian New Year celebrations in a Shia area of Kabul. The number of American casualties has fallen dramatically since the end of 2014 when Afghan forces took over from U.S.-led NATO combat troops to secure the country.

Fighting continues to flare across Afghanistan more than a week after the latest round of talks between the U.S. and the Taliban ended in Doha, as Washington continues to seek an end to the nearly 18-year war.

The Afghan government has complained it is being left out of the negotiations, as many Afghans fear a premature U.S. withdrawal could see the Taliban return to some semblance of power. The country remains on edge as winter comes to end, with warmer weather sparking the potential onset of a new fighting season as analysts warn the Taliban may increase attacks to gain leverage at the negotiating table.

U.S. envoy Zalmay Khalilzad is spearheading efforts to strike a peace deal with the Taliban before Afghanistan’s presidential election, which was pushed back to late September earlier this week.