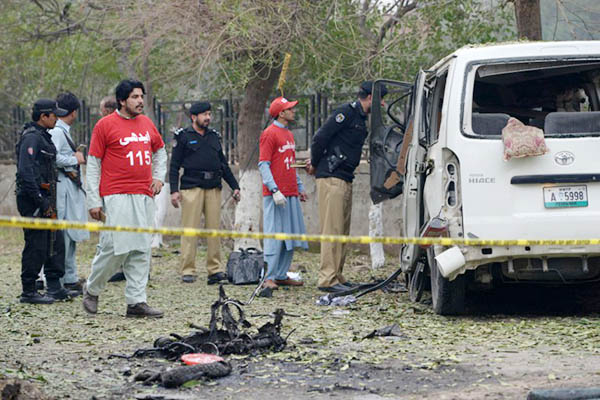 Militants take advantage of ungovernable spaces in Pakistan and Afghanistan.

Over three days, Tehreek-e-Taliban Pakistan offshoot Jamaat-ul-Ahrar has perpetrated suicide bombings in Lahore, Mohmand and Peshawar, killing police officers, civil judges and the staff of a political agent. Unfortunately, many observers have connected the militant group to India because it is based in Afghanistan where New Delhi is believed to dictate terms to Kabul. The presumed logic has been that India wants to damage the Beijing-backed China-Pakistan Economic Corridor (CPEC) project and prevent the staging of the Pakistan Super League cricket tournament final in Lahore to keep our national team excluded from international cricket.

The Foreign Office in Islamabad has summoned the Afghan ambassador and strongly protested the cross-border attacks, asking Kabul to take action against Pakistani terrorists sheltered across the Durand Line. However, when a TV channel interviewed Rustam Shah, Pakistan’s ex-ambassador to Afghanistan, he said something quite different: Kabul only controls 60 percent of its territory and is unable to act against the Pakistani Taliban ensconced in Nangrahar. In contrast, Kabul often complains about acts of terrorism launched on its soil from inside Pakistan. The fact of the matter is that despite the military’s much-vaunted Zarb-e-Azb, Pakistan has not been able to oust all Afghan terrorists from its soil. Thus, both countries seem to suffer from the same kind of “ungoverned spaces.”

In a statement, Jamaat-ul-Ahrar named its attack in Lahore as Operation Ghazi, after the brother of the current head of Islamabad’s Lal Masjid, Maulana Abdul Aziz. Tehreek-e-Taliban Pakistan launched as an Al Qaeda offshoot after Pakistani forces raided the Lal Masjid in 2007, leaving Rasheed Ghazi dead. Maulana Aziz quite disingenuously condemned Operation Ghazi, calling it anti-Islamic, despite the fact that he had a few days earlier condemned Pakistan’s democracy as anti-Islamic where “corrupt rulers pretended to be working for the poor of the nation.”