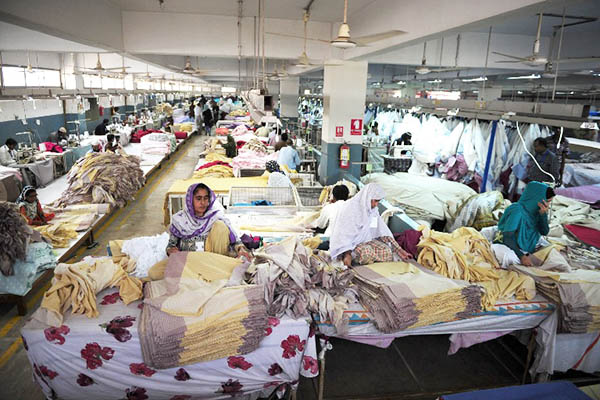 Employees at a clothing factory in Karachi on Nov. 11, 2014. Asif Hassan—AFP

Families of the 255 workers killed in the fire have been partially compensated, but no one has been prosecuted for the negligence.

Over two years after a fire tore through a Karachi clothing factory, killing 255 workers in one of Pakistan’s deadliest industrial accidents, no one has been prosecuted over the catastrophe. The abandoned hulk of the Ali Enterprises factory, which supplied cheap clothes to Western retailers, now stands as a monument to a disaster many would rather forget.

A little after 6 p.m. on Sept. 11, 2012, a fire broke out in the factory storeroom housing jeans and t-shirts made by the 1,000-strong workforce for stores in Europe. Trapped inside, one of the workers, Riaz Parveen, rang his wife Nazia.

“He told me, ‘There’s a huge fire in the factory, if I can’t get out of here I won’t be coming home’,” said tearful mother-of-three Nazia.

Riaz and his brother Rafaqat never came home. Their charred bodies were found in the ashes of the factory. A judicial probe into the blaze was damning, pointing to a lack of emergency exits, poor safety training for workers, the packing in of machinery and the failure of government inspectors to spot any of these faults.

Two years later the victims’ families have received a total of $1.67 million in immediate compensation paid by the factory owners and the German company KIK, which bought much of the production. Negotiations are still going on for long-term benefits.

Nazia got the equivalent of $7,000, which allowed her to buy a small plot of land in the city, but she is still angry at the factory owners and their European partners. “The workers were paid barely Rs. 100 rupees for making clothes that sell for much, much more money,” she said. “They’re sucking the blood of the poor. We are illiterate and uneducated and they exploit this weakness. We realized this when they paid us the compensation.”

A murder case was registered against the factory owners, but it has never come to trial. The delay has infuriated Faisal Siddiqui, lawyer for the victims’ families.

“It just shows you a complete breakdown of the criminal justice system but it also shows you that when it comes to laborers, it is next to impossible to get justice in Pakistan,” he said.

With workers paid around $100 a month, textiles make up more than half of Pakistan’s exports, valued at $13 billion last year and bound mainly for Europe. This year Pakistan won the prized “GSP+” status from the European Union, a highly favorable tariff exemption regime that is a boon to textile exporters. After the Karachi fire, the European Parliament told big brands to re-examine their supply chains in Pakistan and demanded the creation of a new effective and independent system to monitor factories. This has not been done.

The Karachi fire was followed by an even deadlier accident in Bangladesh, where a garment factory collapse killed more than 1,100 people in April 2013. Since then, “there has been pressure to improve textile workers’ conditions,” an industry official said on condition of anonymity. “But this is not philanthropy—the big brands just want to make sure they are not associated with another scandal,” the official said.

Inspection depends on the good faith of those involved. At the D. L. Nash factory, which makes sheets and duvet covers for French retailers, owner Shabir Ahmed is grateful for the safety measures that prevented a disaster in the spring, when a fire broke out on a high floor.

“We rang the alarm bell, the workers were fully trained … and they didn’t rush and so they were evacuated,” he said. “Due to our evacuation plan, not a single person was injured or killed.”

Ahmed spoke to AFP in the presence of a representative of the French company Duquennoy et Lepers, who had come on an inspection visit. Before its devastating fire, the Ali Enterprises factory was given a safety certificate, but the document was fake, issued by a company suspected of fraudulently “inspecting” around 100 Pakistani factories.

Many foreign companies are reluctant to send their own staff to inspect factories in a country beset by near-daily terror attacks. Inspections are often farmed out to local contractors and it is difficult to get a clear picture of safety conditions in the factories, particularly as government inspectors are notoriously susceptible to bribery.

Siddiqui the lawyer sees only one solution: establishing the legal principle that Western buyers are responsible for what happens in Asian factories. “Once it is established that a tragedy which happens in Karachi has implications in Berlin, or Amsterdam, or Paris, or Italy, then I think that would matter,” he said.