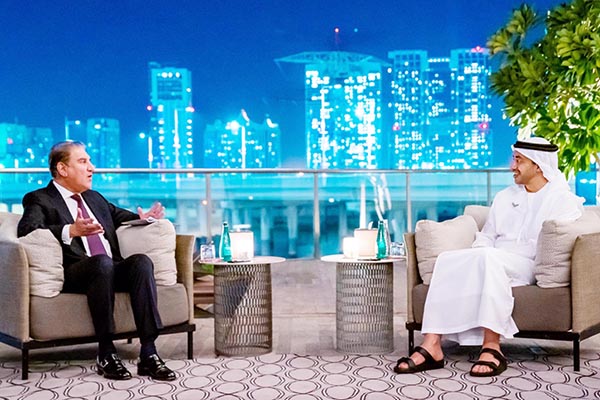 In a statement issued at the conclusion of Foreign Minister Shah Mehmood Qureshi’s two-day visit, Al Nahyan stressed that the travel ban—introduced on 12 mostly Muslim states last month—would soon be lifted. However, the statement did not shed any light on why travel from Pakistan was being discouraged while countries with much worse rates of infection, including the U.S. and India, have not faced any restrictions.

“The U.A.E. is a second home to 1.5 million Pakistanis. The current travel bans are because of the coronavirus pandemic,” he said. “The restrictions on issuing visas are due to the pandemic [and are] temporary,” he stressed. “Pakistan had established diplomatic ties with the U.A.E. soon after it came into being,” he said, adding ties between the two nations had great scope for expansion.

During Qureshi’s visit, the two sides exchanged views on regional development, and discussed ways to coordinate responses on issues of interest, according to the U.A.E.’s foreign ministry. Nahyan “affirmed the depth of the distinguished relations between the two friendly countries and the keenness to enhance and develop further aspects of joint cooperation across all fields,” it said.

He also reiterated the U.A.E.’s appreciation of the Pakistani community in the Gulf nation, praising their “great role and active contribution” to the growth and prosperity of the U.A.E. “The close relations between the U.A.E. and Pakistan have continued to strengthen over the past decades and translated into multi-faceted cooperation, which represents a unique case in Arab-Asian relations in the region, as political relations between the U.A.E. and Pakistan are based on a long history of joint action, trust, and respect,” the U.A.E. foreign minister said.

“The U.A.E. and Pakistan enjoy close relations and historical ties across political, economic, cultural and social domains, established on solid foundations of mutual friendship and respect,” he added.

A statement issued by Pakistan’s Foreign Office echoed the U.A.E.’s readout. It said that Qureshi had, during his meetings with the Emirati leadership, raised issues pertaining to visa restrictions on Pakistani nationals as well as the welfare of the Pakistani diaspora in the U.A.E. “Qureshi was assured that the visa restrictions were temporary in nature and were imposed due to the outbreak of COVID-19 pandemic,” it stressed.

Aside from his discussions on bilateral issues, the Pakistani foreign minister also paid homage to the tomb of U.A.E. founder, Sheikh Zayed bin Sultan Al Nahyan, and offered prayers at the Sheikh Zayed Grand Mosque. He also visited the Consulate General of Pakistan in Dubai where he interacted with local and international media.