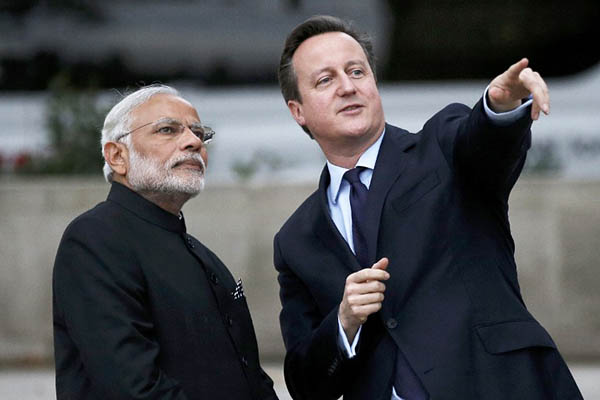 Trade deals worth £9 billion will be announced during Indian Prime Minister Narendra Modi’s visit to Britain, David Cameron said Thursday, as Modi indicated he wanted the U.K. to stay in the E.U.

London is rolling out the red carpet for Modi on his three-day visit to Britain, the first by an Indian prime minister in nearly 10 years. He will meet Queen Elizabeth II on Friday and address a huge rally at Wembley Stadium.

After talks with Cameron, Modi became the first Indian premier to address Britain’s parliament and was feted with a fly-past by the Red Arrows aerobatics team, which trailed smoke over London in the colors of India’s flag.

Cameron announced the trade deals at a press conference and also revealed that £1.0 billion of rupee-denominated bonds would be traded in London. “We want to forge a more ambitious, modern partnership, harnessing our strengths and working together for the long term to help shape our fortunes at home and abroad in the 21st century,” he said.

The deals are expected to include India buying more BAE Systems Hawk trainer jets—the same plane used by the Red Arrows—for its armed forces. But when Modi was asked whether Britain should remain in the E.U., in a referendum called by Cameron and being held by the end of 2017, Modi said: “As far as India is concerned, if there is an entry point to the European Union, that is the U.K.”

Modi’s visit has also drawn protests. Up to 500 people held a demonstration outside Downing Street against the visit before the talks with Cameron, many of them Sikhs.

Modi was elected by a landslide in 2014 but he and his Hindu nationalist Bharatiya Janata Party (BJP) have faced accusations from opponents that they are failing to protect minorities. He was effectively banned from Britain until three years ago over anti-Muslim riots, which killed more than 1,000 people in 2002, when he was chief minister of Gujarat state. He has always denied any responsibility.

Both India and Britain are seeking to build closer economic ties with the other. India is the world’s ninth-largest economy and, at 7.4 percent, has the fastest growth rate in the G20. Former colonial power Britain is the fifth-largest world economy. The government is pushing hard to increase overseas trade as it tries to shrink its large deficit in the wake of the 2008 financial crisis.

Modi ended the day with a speech to British business leaders in the grand surroundings of Guildhall, in the heart of Britain’s financial district. He promised full support for any businesses investing in India.

“I assure you of my personal care in making your dreams a reality,” he said. “Many of you belong to India. Many of you are in India already. For those who are not there, I must say that in this point in time, it is wiser to be in India.”

British trade minister Francis Maude outlined some of the new deals. They included a £1.3 billion investment by Vodafone, a £1.2 billion clean energy contract for technology company Intelligent Energy and a deal for King’s College Hospital to open an institution in Chandigarh.

But Gareth Price of London-based foreign affairs think-tank Chatham House said Britain was lower down India’s pecking order than other nations such as Japan or Germany. “A lot of countries are wooing India with deeper pockets and without the historic baggage,” he told AFP.

Ahead of the visit, Modi’s government this week announced plans to liberalize its foreign direct investment regime in areas including defense, banking and construction. Britain is the third-largest source of FDI in India. Modi faces accusations that his reform drive is stalling, highlighted by the BJP’s bruising defeat Sunday in elections in the state of Bihar.