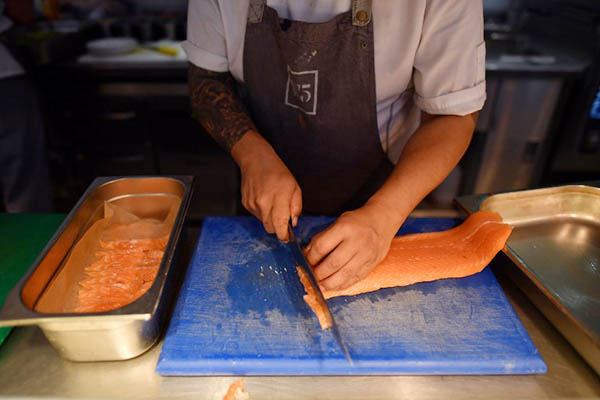 As E.U. nationals leave Britain in ever-greater numbers ahead of Brexit, restaurants like pizzeria chain Franco Manca are reporting shortages that could spell trouble for a sector that relies on immigrant labor.

The number of E.U. nationals leaving Britain, most of them from central Europe, rose by 33,000 to 122,000 people during the 12 months to March, according to the latest data following last year’s Brexit referendum.

Franco Manca’s parent company, Fulham Shore, said the prospect of new controls on immigration when Britain leaves the bloc was “already affecting the availability of skilled European restaurant staff.” The company, where only 20 percent of the staff are British, said it was implementing “a number of incentive schemes” to persuade Europeans to stay.

Owners worry that British workers may not be able or willing to fill the gap left by departing Europeans. The hospitality industry currently has the highest proportion of unfilled jobs in Britain, according to the Office for National Statistics (ONS). And the situation is worsening, with 4.3 percent of hospitality jobs vacant in June to August 2017, compared with 3.5 percent a year earlier.

Alex Wrethman, the head of Charlotte’s group of bistros in west London, said E.U. nationals were being put off by the sharp fall in the value of the pound against the euro since the Brexit vote. The currency devaluation was “effectively a pay cut for them” as it decreased the value of remittances.

Wrethman said he struggled to find Britons who were as committed to the job as their European colleagues. “It’s difficult to find a British person to get out of bed to wash dishes,” said Wrethman, who started working in the restaurants he now owns as a teenager. “It’s tied up with something historic. It’s a class thing,” Wrethman said.

On a break from chopping avocados and smoked salmon for brunches, the head chef of Charlotte’s newest restaurant complained of a “bleak time for the industry,” where he thinks his British background and willingness to work long hours make him a rarity. “We’re very reliant on Eastern Europeans… There’s very few British chefs,” Mike Carter said. “I genuinely believe the industry is two or three years away from imploding.”

Leaked government proposals for restricting the stay of low-skilled E.U. workers to just two years, would be “catastrophic” for the industry, according to trade body, the British Hospitality Association. “Reports of hospitality businesses struggling to recruit new staff are becoming increasingly common,” BHA chief Ufi Ibrahim told AFP. “The decline in the value of the pound is a factor, but so too is the prospect of a more restrictive immigration regime.”

A BHA-commissioned KPMG survey warned that if E.U. immigration is halted after Britain’s E.U. exit in March 2019, the sector would face a “recruitment crisis” and an annual shortage of 60,000 workers.

However, Tim Martin, chief executive of JD Wetherspoon, has a markedly more sunny outlook for his chain of pubs, which employs 37,000 staff of whom around five percent are E.U. nationals.

A major supporter of Brexit, Martin printed pro-Leave slogans onto beer mats in the run-up to the referendum and donated £200,000 to Vote Leave. He derides the free movement laws designed by “unelected bureaucrats” in the E.U., but would welcome immigration based on “some sort of points system like the United States or Australia or New Zealand.”

As bar staff served customers English breakfasts, he said he was not facing any staff shortages but conceded that “it has become a bit more difficult to recruit.”