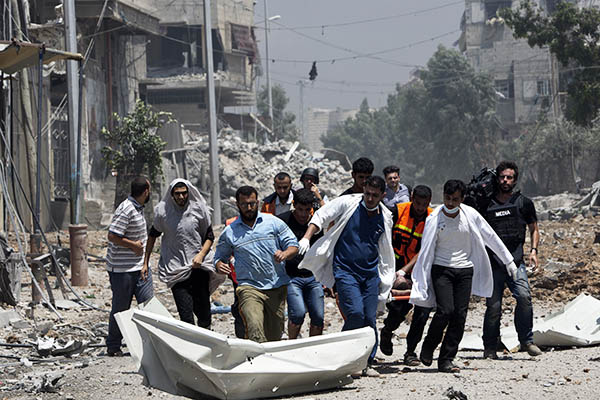 Israeli prime minister blames deaths of civilians on Hamas and claims there is ‘very strong’ international support for operation.

The U.N. Security Council called for an “immediate ceasefire” as Israel pressed on with a blistering assault on Gaza on Monday taking the Palestinian death toll above 500.

A fresh airstrike on Monday morning killed a family of nine, including seven children, after a weekend of incessant shelling by land, sea and air sent thousands of terrified civilians fleeing their homes. A man was also killed in a strike on a motorbike, taking the Palestinian death toll to 502 as the Israeli offensive entered its 14th day, medics said. Gaza’s emergency services spokesman Ashraf al-Qudra said many of the more than 150 Palestinians killed on Sunday—the bloodiest day of fighting in Gaza in years—were women and children.

The Israeli army said 13 soldiers had been killed inside Gaza on Sunday, raising to 18 the number of soldiers killed since a ground operation began late on Thursday.

The Security Council held urgent talks on the conflict, expressing “serious concern about the growing numbers of casualties.”

“The members of the Security Council call for an immediate cessation of hostilities,” said Rwandan ambassador Eugene Richard Gasana, whose country chairs the 15-member council. Late Sunday, the armed wing of the Islamist Hamas movement, which dominates Gaza, claimed it had kidnapped an Israeli soldier, prompting celebrations in the streets of Gaza City and West Bank towns. “The Israeli soldier Shaul Aaron is in the hands of the Qassam Brigades,” a spokesman using the nom de guerre Abu Obeida said in a televised address.

Israel’s U.N. ambassador Ron Prosor denied a soldier had been kidnapped, saying: “Those rumors are untrue.” However a spokeswoman for the Israeli military said they were investigating the claim.

Hamas militants held Israeli soldier Gilad Shalit for more than five years until his release in a 2011 prisoner exchange.

During the Security Council talks, Palestinian envoy Ryad Mansour called for decisive steps to end the violence, and voiced frustration with what he termed the world body’s failure to take a strong stand. “The Council failed again and again to shoulder its responsibility,” Mansour told reporters. Prosor claimed Israel had agreed to earlier ceasefire proposals from Egypt and was acting in self-defense.

Speaking with Netanyahu by telephone early Monday, Obama expressed concern over the deaths on both sides, the White House said. In their second call in three days, Obama “reaffirmed Israel’s right to defend itself” but called for an “immediate ceasefire.” British Prime Minister David Cameron also spoke with Netanyahu, voicing “strong support for Israel’s right to take proportionate action to defend itself from” Gaza rockets, while expressing condolences over the Israeli deaths and concern over the “mounting civilian casualties in Gaza.”

Ceasefire discussions between Hamas leader Khaled Meshaal and the Palestinian president in Qatar were due to take place on Monday after being delayed by a day.

U.N. chief Ban Ki-moon was also in Doha where he urged Israel to “exercise maximum restraint.”

“Too many innocent people are dying … [and] living in constant fear,” he told a news conference in Doha.

So far, ceasefire proposals have been rejected by Hamas, which has pressed on with its own attacks. The Islamists have been demanding that as part of any truce there be a complete end to Israel’s long-standing blockade of Gaza, the Rafah crossing with Egypt be opened, and Israel free scores of veteran prisoners re-arrested in recent weeks.

In the early hours of Monday Israeli jets carried out strikes throughout Gaza, including in southern Rafah and Khan Yunis, and northern Beit Lahiya. Witnesses said warplanes had bombed the home of Hamas politburo member Imad al-Alami in Gaza City, as well as the Khan Yunis home of head of security and police in Gaza, Gen. Saleh Abu Sharekh. No casualties were reported in either attack.

On Sunday, thousands of Palestinians fled the Shejaiya neighborhood, between Gaza City and the Israeli border, after hours of heavy shelling that killed 72 people, according to an AFP correspondent reported.

The U.N. agency for Palestinian refugees UNRWA has opened 61 of its schools to shelter more than 81,000 people who have fled their homes. The Doctors Without Borders charity urged Israel to “stop bombing civilians trapped in the Gaza Strip,” noting the majority of the injured arriving in the Al-Shifa hospital were women and children.

Netanyahu has blamed the civilian casualties on Hamas using innocents “as human shields.” He insisted on Sunday that the military campaign had strong international backing. “We are carrying out a complex, deep, intensive activity inside the Gaza Strip and there is world support for this … very strong support,” he said before a security cabinet meeting.

Although Israel said earlier Sunday it was expanding its ground operation to destroy tunnels used by militants to carry out cross-border attacks and fire rockets, Netanyahu said troops could end their mission “fairly quickly.” His Defense Minister Moshe Yaalon also suggested it could end within days, demanding international action to “demilitarize Gaza.”

Palestinian militants have over the past 12 days fired 1,414 rockets and mortar rounds that hit Israel, with the Iron Dome air defense system intercepting another 377, the army said.