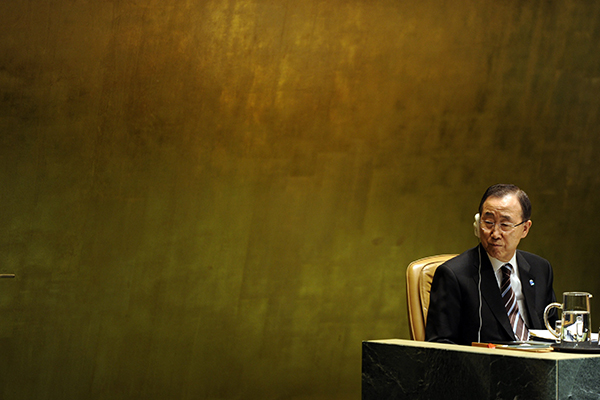 Ban Ki-moon says he is very concerned about incitement from leaders of both sides.

U.N. Secretary-General Ban Ki-moon told the Security Council on Wednesday that he was “not optimistic” following his talks with Israeli and Palestinian leaders to urge them to defuse tensions, diplomats said.

Ban addressed a closed-door emergency session of the council by video-conference from Amman, the latest stop on his mission to put an end to the spiraling violence. The U.N. chief traveled to the region on Tuesday to urge the Israelis and Palestinians to pull back from a “dangerous escalation” that could lead to a full-scale Palestinian uprising.

After meeting Israeli Prime Minister Benjamin Netanyahu and Palestinian leader Mahmud Abbas, Ban delivered a sobering assessment of the prospects, according to diplomats at the meeting. “We were struck by the pessimistic tone which he gave us,” British Ambassador Matthew Rycroft told reporters after the meeting.

“There is a wide gap” between the leaders, said Rycroft, “both on the short term on how to de-escalate and on the longer term, on how to get back to a genuine political process.”

Ban told the council that addressing the situation at the holy sites was key to quelling tensions, and that he was very concerned by incitement from both sides. Stating bluntly that he had emerged from his meetings “not optimistic,” he said there was no time to waste to press for a deescalation and pull the sides back from the brink.

At least 47 Palestinians and an Arab Israeli have been killed in the upsurge in violence that began at the start of the month, including alleged attackers. Eight Israelis have also died.

The U.N. chief also presented a report prepared by his legal experts on international protection after the Palestinians called for the deployment of an observer force in east Jerusalem. The report, seen by AFP, outlines 17 cases—from Trieste after World War II to Kosovo in 1999—when the Security Council stepped in and set up special regimes to guarantee the protection of civilians.

In a letter to the council, Ban said the report should not be seen as an “options paper” for addressing the current crisis but could be useful in “informing future work on this subject.” The 42-page summary of precedents was prepared last year, but it has been the focus of recent interest following an appeal from the Palestinians for international protection, beginning with an observer force at the Al-Aqsa compound.

Clashes between Israeli security forces and Palestinian protesters at the Al-Aqsa mosque in September sparked the current wave of violence. Israel last week flatly rejected any suggestion that an international presence could be deployed at Al-Aqsa, saying it would violate the status quo.

Ban’s report comes on the eve of a ministerial-level Security Council debate on the way forward in the Middle East amid growing fears that the violence could spiral out of control.