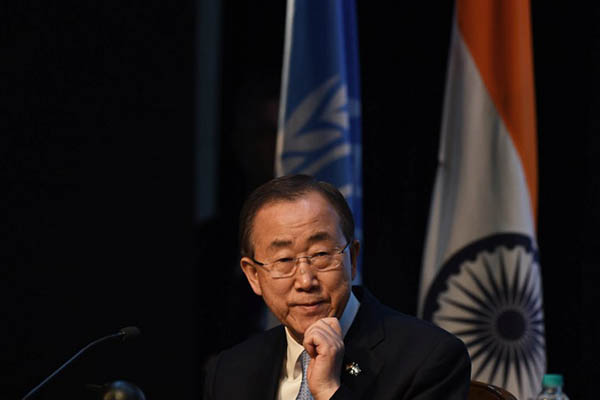 U.N. chief Ban Ki-moon urged India on Monday to help shore up stability in war-torn Afghanistan after the departure of U.S. troops, saying the world was relying on South Asia’s powerhouse to play a lead role.

Speaking on a visit to the capital New Delhi, Ban said India had a “huge role” to play on the security front in a region that has been beset by unrest. “The world is looking at India to help advance peace and prosperity in South Asia,” the U.N. secretary general said at a pubic lecture. “Continuing instability in Afghanistan and Pakistan is not only the responsibility of these two nations. These challenges should be addressed through greater bilateral parleys. The security challenges in Afghanistan cannot be solved by military process. It needs regional support from India,” he added.

India has poured $2 billion in reconstruction aid into Afghanistan and has been asked for further support, including military assistance in Kabul’s battle to contain a Taliban insurgency after a NATO combat mission wound up at the turn of the year. But while pledging to do all it can to promote stability, New Delhi is wary of being sucked into a “proxy war” in Afghanistan involving allies of Pakistan.

Since first becoming a nuclear power in 1974, India has said it would only ever use atomic weapons in response to an attack as part of its “no first use” doctrine.

unfortunately , the role of united nations is not good for Muslim countries . This organistion has dual face for Palestine , Kashmir , Iraq , Yemen ,and sriya . however India has become more powerful now a days but we should not forget the miseries of its people as well , there is no freedom of speech , no security for women and for Muslim community even no washrooms in India , as we talk about India s concern about Afghanistan we all know that many Indian missions are working over there , and most of us know about their hidden activities …. India s role would only be to destroy and destabilize Pakistan . India also add mitts its role in Baluchistan and contact with Taliban ,,,,,,,,,,, so now the time has come to realize our duties for our nation , we should not depend on United Nation……….

@Raazia Syed:- yes dear u r ryt in saying India lacks this and dat but we should also agree that almost all of the immediate neighbours of afghanistan face the same situations…..nd yes India is slowly becoming powerful but not because of external benefits like free military weaponry which recently pakistan got from china or external pumping of billions for the so called war on terror which in reality is proxy war on India…