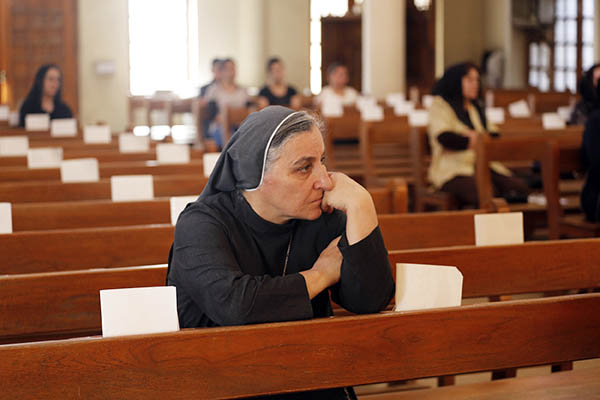 The United Nations Security Council has denounced militant persecution of Christians and other minorities in Iraq, warning such actions can be considered crimes against humanity.

The Islamic State, which last month declared a “caliphate” straddling large swathes of northern Iraq and Syria, has threatened a Christian population that has lived in the region for close to two millennia. Over the weekend, hundreds of families fled Mosul, a once-cosmopolitan city that is the country’s second largest.

In a unanimous declaration adopted late Monday, the Council’s 15 member countries condemned “in the strongest terms the systematic persecution of individuals from minority populations and those who refuse its extremist ideology in Iraq by ISIL and associated armed groups,” it said, referring to the group’s former name of Islamic State of Iraq and the Levant.

“The members of the Security Council further recall that widespread or systematic attacks directed against any civilian populations because of their ethnic background, religious beliefs or faith may constitute a crime against humanity, for which those responsible must be held accountable.”

The Council also asked that the Iraqi government and the United Nations intensify their efforts to serve the “urgent” humanitarian needs of people displaced by the conflict and to tackle the “terrorist threat” against minorities.

Earlier the same day, the world’s top Islamic body also denounced the persecution of Christians and offered to help those displaced.

Organization of Islamic Cooperation Secretary General Iyad Madani said the “forced displacement” of Mosul’s Christians showed the IS’s “practices have nothing to do with Islam and its principles that call for tolerance and co-existence.”

“These atrocities also contradict the principles of the OIC,” of which Iraq is a member, Madani added, noting that the body was “ready to provide the necessary humanitarian assistance to displaced persons until they be able to return to their homes.”

On Sunday, the militants took over the fourth century Mar (Saint) Behnam monastery in northern Iraq, one of the country’s best-known Christian landmarks, and expelled its resident monks.

Christians abandoned their homes and belongings in Mosul after IS fighters running the city issued an ultimatum for Christians to convert, pay a special tax, leave or face the sword.

Before the 2003 U.S. invasion, over a million Christians lived in Iraq, including more than 600,000 in Baghdad and 60,000 in Mosul, as well as a substantial number in the oil city of Kirkuk and in Basra. Until their forced exodus over the weekend, Christians had been continuously present in Mosul for about 16 centuries.