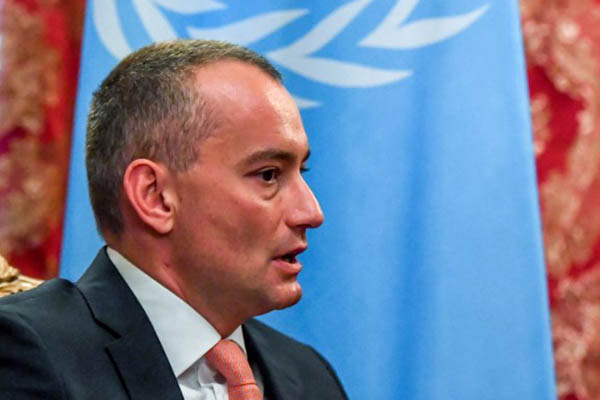 The Palestinian leadership will no longer work with the U.N. peace envoy, a senior official said on Thursday, accusing him of overstepping his role by seeking a deal between Israel and the Islamist movement Hamas.

Ahmed Majdalani, a member of the Palestine Liberation Organization’s (PLO) executive committee, said it had informed the U.N. secretary general that envoy Nickolay Mladenov was “no longer acceptable” to the Palestinian government. Mladenov had “gone beyond his role” in seeking agreements between Israel and rival Palestinian faction Hamas, which controls Gaza, he said, adding that his actions impacted “Palestinian national security and the unity of our people.”

There was no immediate comment from Mladenov or confirmation from the United Nations.

Mladenov, alongside Egypt, has been seeking a long-term truce agreement between Hamas and the Jewish state, without including Abbas’s internationally recognized government in the indirect negotiations.

The talks have stalled, partly due to pressure form Abbas, but on Tuesday a smaller U.N.-brokered agreement was reached for Qatar to finance much-needed fuel deliveries to Gaza for six months. Abbas’s government was not involved in that deal and Mladenov’s strategy has angered Palestinian politicians.

The Palestinian Authority headed by Abbas has semi autonomy in parts of the occupied West Bank but lost control of Gaza to Hamas in a near-civil war in 2007.The international community has since worked with the Authority.

The PLO has recognized Israel and signed a series of peace treaties with it, while Hamas has fought three wars with the Jewish state since 2008.