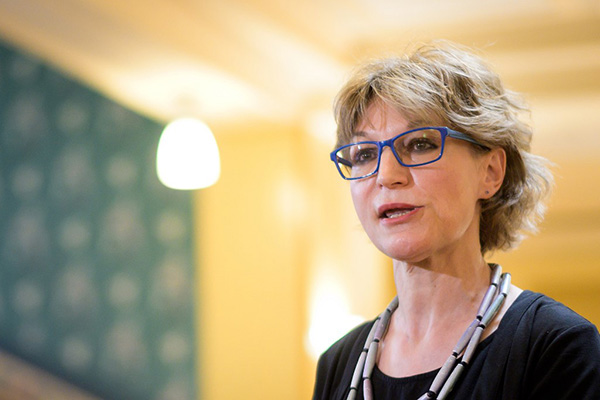 U.N. “paralysis” has prevented accountability for the brutal murder of Saudi journalist Jamal Khashoggi, a rights expert said on Wednesday, accusing Secretary General Antonio Guterres of failing to act in pursuit of justice.

U.N. special rapporteur on extrajudicial, summary or arbitrary executions, Agnes Callamard, delivered the harsh criticism of the world body after presenting her bombshell report on Khashoggi’s murder to the Human Rights Council in Geneva.

Callamard’s report concluded that Khashoggi’s death at the Saudi consulate in Istanbul on Oct. 2 was “an extrajudicial execution” and that Riyadh was responsible, with evidence linking Crown Prince Mohammed bin Salman to the crime. She has called on Guterres to initiate an international criminal probe, but the secretary general’s spokesman has countered that U.N. chief lacks the authority to do so and requires a member state to initiate an investigation.

Callamard told reporters she was “disappointed” in that reaction from Guterres spokesman Stephane Dujarric. “I am absolutely not suggesting that it is written in black and white,” that Guterres can act alone, she added. “What I am suggesting is that it is in his power to interpret the rules as they are to give himself the opportunity and the power to establish this panel of [criminal] experts. I don’t believe you need a member state official demand,” she continued.

“This being said, I certainly call on member states to proceed with that official demarche so that the secretary general will not be able to just create more firewalls between him and his responsibilities to take action.”

Callamard had earlier told the rights council that she launched her human rights investigation because of “the paralysis of the United Nations,” in response to Khashoggi’s murder.

Callamard, like all special rapporteurs, is an independent expert who does not speak for the U.N. but who reports her findings to it.

Riyadh’s U.N. envoy Abdulaziz Alwasil, however slammed the report as relying on “prejudice and prefabricated ideas,” while accusing Callamard of exceeding her mandate. He insisted that Saudi Arabia was capable of handling the matter, pointing to an ongoing domestic trial of the purported rogue agents that Saudi prosecutors say were responsible.

“This is not a domestic matter,” Callamard said, highlighting the international nature of the crime and the fact that, in her view, the Saudi probe was not credible.

Multiple countries, notably from the Arab world, also lined up behind Riyadh in the rights council, accusing Callamard of spotty methodology and of violating Saudi sovereignty.

Turkish ambassador Sadik Arslan stressed that Khashoggi was “brutally murdered in [his] country,” and said Callamard’s work had raised hope for justice.

Khashoggi’s Turkish fiancée Hatice Cengiz, who on Oct. 2 stood and waited for him in vain outside the consulate where he had gone to pick up documents needed for their marriage, also addressed the U.N. session. Her voice shaking at times, Cengiz urged the rights council to “take action.”

“I want to know who gave the order to kill Jamal, and who else knew. I want to know where is his body,” she said. “Those who are behind the murder and cover-up should face punishment.”

Callamard, a French national who teaches at New York’s Columbia University, also called for a new U.N. taskforce capable of reacting rapidly to suspected targeted killings of activists, journalists and others.

This new “instrument” could resemble the U.N. body created to prepare prosecution files for those most responsible for atrocities in Syria, Callamard said. “It is not going to happen overnight,” she told reporters.

But, she added, “the paralysis that we are witnessing, the ping pong games between who can do what, the inability of the secretary general to determine whether or not he can move with something… all of those things will be solved if there was a standing instrument that could take upon itself to investigate this kind of crime.”