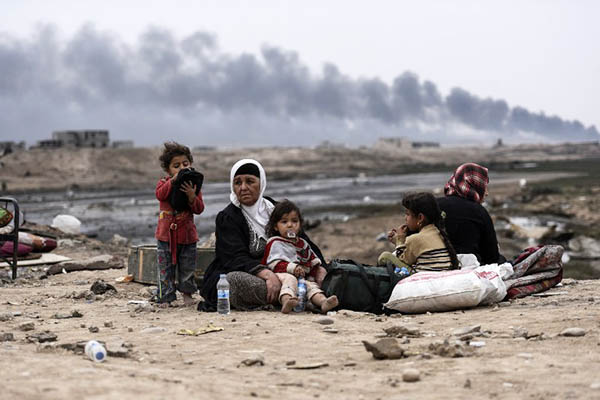 The militant group is using civilians as human shields and reportedly shot dead 232 people in a single day.

Jihadists have killed scores of people and taken tens of thousands to use as human shields in the Mosul area, the United Nations said on Friday, as Iraqi forces temporarily halted their advance on the city.

Thousands of people have fled from areas surrounding Mosul, prompting a warning of “massive displacement” when fighting starts inside the Islamic State jihadist group’s last major Iraqi urban stronghold. I.S.’s “depraved, cowardly strategy is to attempt to use the presence of civilians to render certain points, areas or military forces immune from military operations,” Zeid Ra’ad Al Hussein, the U.N.’s High Commissioner for Human Rights, said in a statement.

The jihadists are “effectively using tens of thousands of women, men and children as human shields,” he said.

The U.N. human rights office said that credible reports indicate I.S. has forced tens of thousands of people from their homes and forcibly taken civilians into Mosul, killing those who resist or who were previously members of Iraqi security forces. The population of Hamam al-Alil, an I.S.-held area south of Mosul that is an upcoming target for Iraqi forces, has reportedly nearly trebled, it said.

I.S. reportedly shot dead 232 people in a single day on Wednesday and killed 24 the previous day, the rights office said. The killings, which the U.N. said have been “corroborated to the extent possible,” are just the latest in a long list of atrocities committed by the jihadists since they overran swathes of Iraq in 2014.

The U.N. report came as Iraqi forces were temporarily halting their advance on Mosul for a period which the U.S.-led anti-I.S. coalition said was expected to last “a couple of days.”

“They are pausing and repositioning, refitting and doing some back clearing,” coalition spokesman Colonel John Dorrian told Pentagon reporters via videoconference. “We think it will just be a couple of days and then we are back on the march toward Mosul,” he said, adding that Iraqi forces were between 10-20 kilometers from the city.

Since the Mosul offensive began last week, the coalition has employed nearly 2,500 bombs, missiles, shells and guided rockets, he said.

An Iraqi military statement, apparently issued in response to Dorrian’s remarks on the halt, said that “military operations are continuing” and proceeding on schedule.

As Iraqi forces have closed in on Mosul from the north, east and south, growing numbers of civilians have fled I.S-held areas and the impending fighting in territory the jihadists control.

The International Organization for Migration said that as of Friday, 16,566 people had been displaced since the operation began on Oct. 17, the vast majority in the Mosul region. “We’ve seen… quite a dramatic increase in the numbers in the last few days, and they are now going into the newly set up camps,” Karl Schembri of the Norwegian Refugee Council told AFP. “This is already worrying because they haven’t yet entered the city… when that happens, it’s going to be quite massive displacement,” he said.

The potential for a humanitarian crisis as tens of thousands of civilians are forced into camps with winter looming is just one of a raft of issues that have complicated military planning for the recapture of Mosul. Thousands of Kurdish peshmerga fighters are taking part in the operation alongside Iraqi government troops, and Kurdish leaders have made clear that they will expect payback once it has been successfully completed.

The Kurds, who have expanded the territory under their control far beyond the boundaries of their longstanding autonomous region in the north, say their hopes of a new Iraq have been dashed and that they will now explore a separate future. “As soon as Mosul is liberated, we will meet with our partners in Baghdad and talk about our independence,” the region’s prime minister Nechirvan Barzani told Germany’s Bild newspaper.

But for now, the battle for Mosul is far from over, and most of the advancing forces are still some distance from the city limits. The head of U.S. military operations in the Middle East, General Joseph Votel, said the jihadists were suffering heavy losses.

“Just in the operations over the last week and a half associated with Mosul, we estimate they’ve probably killed about 800 to 900 Islamic State fighters,” Votel told AFP in an interview.