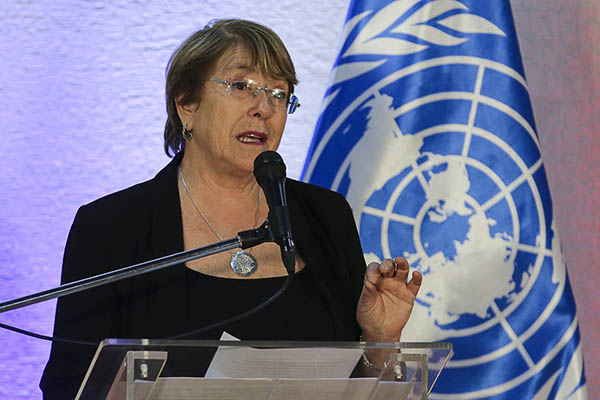 Michelle Bachelet urges governments against responding to the virus with political, ideological or purely economic focuses

Emerging from lockdowns imposed to curb the spread of the novel coronavirus too hastily risks the early emergence of a second wave of the virus that could prove far more destructive than if it were handled with care, U.N. High Commissioner for Human Rights Michele Bachelet has warned.

Addressing media from Geneva on Thursday, the former doctor and Chilean head of state acknowledged that governments were facing an unprecedented challenge in grappling with the medical crisis while also trying to prevent their economies from collapsing.

“Balancing the economic imperatives with the health and human rights imperatives during the COVID-19 pandemic is going to be one of the most delicate, daunting and defining experiences for all leaders and all governments,” she said. “Their place in history will be decided by how well or how badly they perform over the coming months,” she said, adding that any response that ignored the plight of less privileged or marginalized communities would eventually rebound on everyone.

Bachelet said that mishandling an end to lockdowns would render as worthless the sacrifices already made. Instead of saving the economy, it would significantly amplify its collapse, she warned.

Pointing to South Korea, New Zealand and Germany, the U.N. official said lockdowns should be lifted after transmission has been brought under control and healthcare systems are able to detect, test, isolate and treat every case, as well as their immediate contacts. However, she added, “we can also learn lessons” from South Korea and Germany, which have seen a resurgence of COVID-19 cases since relaxing their emergency measures.

Underlining the need to address the risk to vulnerable locations such as care homes, psychiatric institutions, refugee camps and detention centers, she said governments must have plans in place to ensure isolation and specialized treatment for all those who might become exposed to COVID-19 in the future. “The neglect of elderly people in care homes in some countries during the first wave of the pandemic has been horrifying,” she said.

Similarly, the U.N. official said, plans to ease lockdowns should include specific measures for high-risk groups, including racial and ethnic minorities, migrant workers, people with disabilities, those with existing underlying health conditions, and the elderly. “Never before has it been so starkly clear that it is important for all of us that no one is left out of social protection schemes. And in some countries such schemes barely exist,” she said, urging wealthier nations to support poorer nations during the crisis.

“When lifting lockdowns, those without stable incomes, those not able to work remotely, and all those in essential jobs—which is not just health workers—will face the highest risks. It is finally starting to be noticed that disproportionate numbers of essential workers are migrants, and that most of them, despite being ‘essential’ are often very poorly paid,” she said.

Moving forward would also mean securing the opinions of citizens for decisions that affect their lives, including how to lift emergency measures. Participation, she said, builds greater trust in authorities and better compliance with public health measures.

“As a former politician, I know how difficult it can be for national leaders and ruling parties to take politics out of the equation,” she said. However, she added, this pandemic would not be contained by politics or ideologies, or by a purely economic focus. “It will be contained by careful, sensitive, science-guided policymaking, and by responsible, humane leadership,” she said.

“Letting politics or economics drive the response at the expense of health and human rights will cost lives and do even more damage in both the short and long terms. Such approaches are simply not sustainable,” she said. “And they will not be sustainable in the future either. We will not be able simply to return to the ‘normal’ economy, and other parts of the pre-COVID-19 status quo, when the pandemic is over. That should be the most important lesson learned from this crisis.”