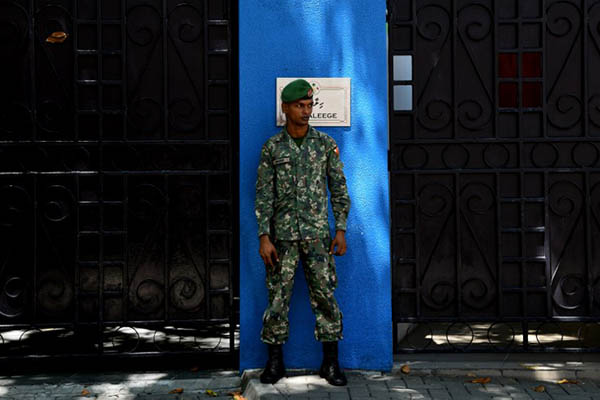 A senior U.N. official warned the Security Council on Thursday that the situation in the Maldives where the president has declared a state of emergency may deteriorate even further.

The top U.N. body met behind closed doors to discuss the crisis sparked by President Abdulla Yameen’s decision to arrest judges who had ordered the release of his political opponents.

U.N. Assistant Secretary-General Miroslav Jenca told the top U.N. body that while there were no reports of violent clashes, “the situation in the Maldives is tense and may deteriorate even further,” according to U.N. sources.

It was the first time that the council discussed the crisis since it began on Feb. 1, but there was no statement released after the meeting.

The crisis was triggered by a surprise Supreme Court decision to release from jail former president and opposition leader Mohamed Nasheed and eight other political prisoners. Nasheed was in self-imposed exile abroad after traveling out of the islands on prison leave.

Four days after the court order, Yameen declared the state of emergency and ordered his security forces to the court to arrest the chief justice.

Jenca this week spoke by phone with the Maldives foreign minister and asked him to release the chief justice urgently. Jenca said the government must resolve the political crisis through all-party talks and offered U.N. assistance to facilitate those negotiations.

On Thursday, Yameen refused to meet with diplomats from the European Union, Germany and Britain. Western governments, as well as neighboring India and China, have asked their citizens not to go on holiday in the picturesque but troubled nation of coral islands.